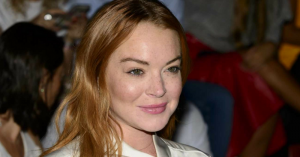 Apparently, spending a decade of drug-riddled irrelevance followed by weird religious conversions and extensive treatment for alcoholism can really red pill someone.

That, or even a blind washed-up Hollywood actress gets an acorn once and a while.

Lindsay Lohan, the once-adorable child star who went from Disney movies to mug shots in about five seconds, fading quickly from the spotlight by the age of 21, has made some controversial, albeit insightful comments about the counter-productive #MeToo movement.

The Daily Wire reports that Lohan, who initially defended Harvey Weinstein when allegations of rampant sexual harassment and abuse against the movie mogul first surfaced, recently made some comments about the #MeToo movement that definitely go against the prescribed Hollywood narrative about women’s empowerment:

In an interview with The Times published on Wednesday, actress Lindsay Lohan, 32, who has had a rather checkered career since she rocketed to stardom at the age of 12 in “The Parent Trap,” had a few words for some women who claim they have been sexually harassed: “it makes them look weak.”

Lohan decried what she called the “attention-seekers,” asserting, “If it happens at that moment, you discuss it at that moment. You make it a real thing by making it a police report. I’m going to really hate myself for saying this, but I think by women speaking against all these things, it makes them look weak when they are very strong women. You have these girls who come out, who don’t even know who they are, who do it for the attention. That is taking away from the fact that it happened.”

No matter how you slice it, it is true that the #MeToo movement may have done much more to hurt genuine victims of sexual abuse than hurt them.

For one, is downright deceptive and immoral to conflate sexual “harassment”, a very general and squishy term that could refer to something as small as asking a woman out or complimenting her outfit, with sexual abuse and assault, the acts of forcefully touching or even violating another human being.

Lohan is also right that if a woman considers herself to be empowered, she’s more than welcome to act empowered, and blaming men when she felt too uncomfortable to expose a man for acting like a pig isn’t the behavior of an empowered woman.

It’s time we start taking sexual immorality seriously again, and start holding everyone–men and women–to the same standards of basic human decency. Is that so hard to ask?