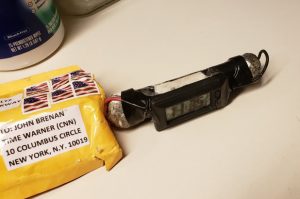 The internet is a powerful tool.

Sometimes it can seem like the mainstream media has an iron-grip on the national narrative, and largely uses that power to scare us, anger us, and hype us up.

But in the case of the recent so-called “MAGAbomber” (no, there isn’t a scrap of evidence the “bomber” was a MAGA fan), the photos released by the media clearly meant to underscore the severity of the threat has, with the help of some experts who happen to have Twitter accounts, helped expose a possible hoax.

No, I’m not saying this was a hoax, we don’t know that yet. But I’ll definitely take serious the analysis provided by someone who knows a heck of a lot more about bombs than I do and doesn’t work for the mainstream media, former Navy explosive ordnance disposal (EOD) officer Tom Sauer who, in a tweet that went viral this week, explained that the “bombs” very likely meant to be intercepted.

Following his Twitter thread, he spoke to the Daily Wire about his assessment of the bomb, based on the widely-circulated photos that have been released:

Sauer, whose identity has been verified to The Daily Wire, used his expertise to analyze an image of a package addressed to former CIA Director John Brennan, which was first obtained by CNN. The former bomb disposal officer, who emphasized that he only spoke on behalf of himself, told The Daily Wire that the makeup of the device appears to indicate that it was intended to be intercepted. “It’s highly, highly unlikely that this was a genuine attempt,” he explained. “This is like holding up a bank with a toy gun.” ​

In his viral thread, Sauer made note of some of the red flags that support his assessment.

A few observations from a former bomb disposal officer (i.e. Me):

2. You can find timers / remote control receivers WAY smaller than whatever that white box is. A proper timer would best be stored inside the pipe, making it fully encapsulated. That thing is just silly looking.

3. Bottom Line: Whoever made that wanted it to be painfully obvious to anyone and everyone that it's a "bomb."

This is nearly the same as a bundle of road flares wrapped together with an old-timey alarm clock ticking away.

“Whoever made that wanted it to be painfully obvious to anyone and everyone that it’s a ‘bomb,'” is his striking bottom line. “This is nearly the same as a bundle of road flares wrapped together with an old-timey alarm clock ticking away.”

This is certainly consistent with the facts we already have. None of the bombs, who were sent to people who certainly don’t check their own mail, were all intercepted immediately and not one detonated. Some were accompanied with white powder proven to be harmless.

This is not to say it isn’t wrong to send inert bombs to people right before an election to make some sort of threat, no matter what side of the political spectrum you’re on.

But I think we can safely assert these bombs were likely only meant to scare.