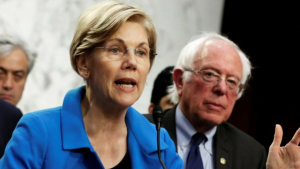 Another far-left progressive makin’ bank by pretending to care about poor people.

Don’t you just love it?

It seems like, in the US, those who push for our capitalist nation to become socialist already fit the bill for leaders of a socialist country: they’re rolling in dough while they lecture us about how hard the little guys have it.

Socialism has always been profitable…for those at the top, that is.

Isn’t that what they tell us about capitalism? And yet here we are, 2018, with a quintessential capitalist in the White House passing policies that make everyone richer, not just the 1% who claim to stand up for the 99%.

Elizabeth Warren, like her buddy Bernie Sanders (who is apparently poor compared to Warren), is definitely part of that 1%, but as long as we’re passing conservative fiscal policy, she’ll have to do without the authoritarianism.

The Daily Wire reports on her ballin’ status:

In 2017, Warren and her husband, a Harvard University professor, hauled in nearly $1 million in adjusted gross income. Warren was the moneymaker ,though her husband claims to have earned around $430,379.

The numbers aren’t much of a surprise. Warren is believed to have a net worth somewhere in the ballpark of $7 million to $10 million and most of that money is “held in mutual funds and retirement accounts with TIAA-CREF” — a bank that serves Ivy League professors, and which often invests in the kinds of corporations Warren’s policies would impact.

Perhaps most ironic, much of Warren’s 2017 income comes from her book, “This Fight Is Our Fight: The Battle to Save America’s Middle Class,” despite the fact that she is nowhere near middle class.

That’s a lot of dough.

It’s almost as if talking about helping poor people while passing policies that prevent them from moving ahead in life is incredibly lucrative.