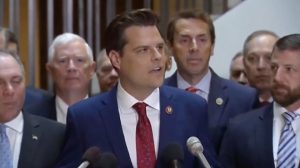 The public is very curious as to what caused the lights to go out on Thursday while Rep. Matt Gaetz was giving a speech concerning the politicization of the Justice Department.

WATCH: Lights suddenly go out on Rep. Matt Gaetz during a House Judiciary hearing Wednesday while speaking about the politicization of the Justice Department. pic.twitter.com/9taaQfyQHd

Gaetz was in the middle of a story about a federal law enforcement officer telling him not everyone in law enforcement was guilty of “these terrible things that we see in our organization” and expressing optimism that “there was a real whistleblower who stood up to tell us what was really going on” when the lights went out, leaving the Florida Republican and everyone attending the meeting in darkness.

“Well, I wonder who that is,” Gaetz asked out loud when the lights went kaput.

Gaetz was encouraged to keep talking, even though the sudden interruption was “a little bit like a Twitter moment,” likely a reference to Gaetz’s allies, such as Rep. Marjorie Taylor Greene, being locked out of their Twitter accounts for alleged infringements of the terms of use.

The chairman was asked by an unidentified speaker whether Gaetz could have an additional minute to make up for the interruption. Someone was heard saying Gaetz’s time would be suspended, as the meeting did not have a clock yet for his speaking time.

A person who was in the meeting then wondered out loud whether or not the lights going out was “foreign interference,” which was a joke that made reference to many elected officials who have made claims about various foreign entities attempting to get involved in U.S. political affairs.

“Gaetz has been critical of federal law enforcement for several months. On June 30, the Florida Republican called for an investigation into claims that the National Security Agency monitored Fox News host Tucker Carlson, allegations the federal agency disputed,” the report said.

Will we ever really know what happened? Who knows.

Guess we need Unsolved Mysteries to come tell us what really went down. Maybe it was aliens.