Why Does Any Life Really Matter? 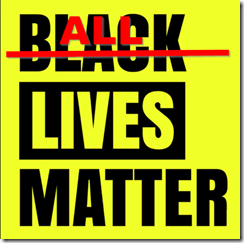 Why Does Any Life Really Matter?

One of the most prominent movements vying for public attention in America at the moment is the, “Black Lives Matter” movement.

Black Lives Matter was created in 2012 after Trayvon Martin’s killer, George Zimmerman, was acquitted. The founders of the BLM were three “queer” women (to use their own terminology): Opal Tometi,  Patrisse Cullors and Darnell L. Moore.

In an interview, Darnell Moor stated: “And it’s important to note, we are all queer leaders. This is so important, not only because it shapes our politics, which is why we’re pushing ourselves to be more expansive. It is important in this conversation to say that we are queer. Patrisse and I have talked a lot about how Black queer, women’s, and trans voices are absolutely left out of national conversations about Black people’s lives. So it is important to reiterate our own queerness. Patrisse and I have spent a lot of time with young queer leaders in Ferguson; we have spent a lot of time providing them with support.”

From a biblical Christian perspective, this should immediately raise red flags concerning anything and everything that comes from this movement.

However, the real issue must not continue to be overlooked and that is:

From a Christian perspective, we know the reality is that God alone can give our lives meaning. Without God there is no purpose or meaning to life. Evolution boldly removes God from the classroom and teaches students from the nursery to the university that we are mutational accidents; that we are “the fortunate mistakes of countless biochemical morons. This is evolution. It is humbling but somehow comforting” (Discover, 2006, March, pg. 31). At the end of the day evolution does not support “Black Lives Matter.” This theory is all about survival of the fittest.

You can’t legislate that every government school, from kindergarten to the university, must teach the godless theory of evolution and then turn around and decry the evil of racism. Evolution is the foundation for that racism — and yet politicians demand we teach it in the classroom. You also can’t get behind a podium and say black lives or police lives matter while demanding we remove God from every classroom or town square. Without God life has no meaning or purpose! Plainly put, the evolution legislated in the 1960s is responsible for what we are seeing in the streets of America today.

A case in point is the following quote: “The Negroid stock is even more ancient than the Caucasian and Mongolian, as may be proved by an examination not only of the brain, of the hair, of the bodily characters, such as the teeth, the genitalia, the sense organs, but of the instincts, the intelligence.  The standard of intelligence of the average adult Negro is similar to that of the eleven‑year‑old youth of the species Homo Sapiens.”

The author of the above extreme racist opinion, H. R Osborn, was not a backwoods bigot, but rather the most prominent American anthropologist of the first half of the twentieth century, director of the American Museum of National History, and a leading evolutionist.  His opinion was not based on innate prejudice or on some strained biblical interpretation, for he was a highly educated scientist and did not believe the Bible at all.  Osborn honestly felt his racism was based on evolutionary science! So did most other anthropologists, before Adolf Hitler gave racism such a bad name.

Atheistic evolutionary theory teaches that all humans are only the byproducts of blind forces which had no intention to produce rational creatures. From evolutionary philosopher Daniel Dennett’s perspective, “the human mind is something of a bag of tricks, cobbled together over the eons by the foresightless process of evolution by natural selection.” But if our minds were not designed, why would we trust them? In a happenstance evolutionary world we would not expect our minds to guide us to truth.

Atheist philosopher Paul Churchland stated bluntly, “If [the standard evolutionary story] is the correct account of our origins, then there seems neither need, nor room, to fit any nonphysical substances or properties into our theoretical account of ourselves. We are creatures of matter. And we should learn to live with that fact.” In other words, expect animals to act like animals!

Pastor Chris Strevel summarizes the foundational issue as he writes: “If the reigning American philosophy is true — no God, nothing but nature, government, and possessions — then there is not a life among us that is worth a penny. All lives are accidents. Neither black men nor white, neither brown nor yellow, has the slightest reason to complain against mistreatment, prejudice, or injustice. Each of these assumes an objective standard of morality that is not to be found in the megaphone hustler leading a protest or the slick politicians practicing the politics of guilt and envy.

“Have white police officers unjustly killed black citizens? If God does not exist, if our society rejects his law, if evolution is true, then who cares? No one can complain: survival of the fittest. Are corporations sucking our national lifeblood dry, supported by their political cronies and cabal of lobbyists? If God does not exist, nothing is right, nothing is wrong. Life just is, without rhyme or reason. Ironically, the current unpleasantness forces us to reject atheism. Justice matters. Human life matters, and your philosophy or science professor that tells you otherwise is a fool. Men may fornicate, blaspheme, and divorce with libertine recklessness, but in a crisis, absolute standards of justice matter very much. God and his law are unavoidable. If you will not worship him in the church, you will face him in the bloody streets. Unbelief always leads to societal revolution.”