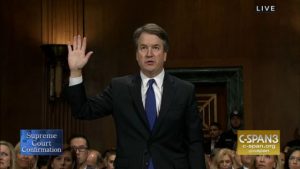 Kavanaugh delivered some questions for lawyers on both sides of the issue with cool, calm resolve, which seemed to completely shock leftists who were convinced just a week ago that the man was psychologically unfit to serve after getting visibly upset at having false accusations thrown his direction.

That’s the left for you.

Leftist publication, Mother Jones, led the charge, describing how a “very different” Brett Kavanaugh “survived” his first day on the Supreme Court, as if Kavanaugh had never, in his decades-long career on the federal bench, presided over a single case before.

“Kavanaugh seemed to have spent the long days awaiting his delayed Senate confirmation vote boning up on the cases on the docket. He was prepared with questions and engaged with the minutiae of the obscure criminal cases the court heard on Tuesday,” Mother Jones writer Stephanie Mencimer wondered, clearly in awe of Kavanaugh’s ability to catch up to his job.

“It wasn’t a standout performance,” Mencimer declared, “[b]ut it wasn’t the sobbing, raging Kavanaugh last seen in public defending himself in the Senate from allegations of sexual assault, either.”

Even stranger, Mother Jones seemed startled that Kavanaugh formed an immediate rapport with his next-door neighbor on the bench, left-leaning Justice Elena Kagan.

“Kagan seemed to be trying to uphold that image of a neutral, collegial body on Tuesday. She leaned over several times to chat and laugh with Kavanaugh before oral arguments kicked off. After they were over, she shook his hand,” Mencimer added at the end of her essay.

Apparently, being a decent human being who is friendly with co-workers has now become such a rarity in our polarized political climate that it leaves folks stunned to see individuals with two different worldviews actually getting along together.

That’s a sad commentary in and of itself, isn’t it?