Liberals are Furious With CRTV For “Interview” With Socialist Democrat Candidate. Just One Tiny Problem… 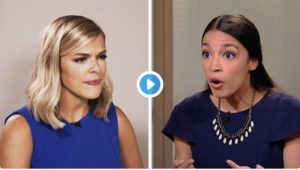 In case you haven’t noticed, the modern day liberal movement has destroyed it’s own sense of humor, thanks in large part to it’s insane religious devotion to political correctness, making them incapable of picking up on sarcasm, wit, and satire, a fact that has been made abundantly clear this week.

The always outraged masses of left-wing America have been losing their collective minds this week over a satirical interview published by CRTV featuring conservative host Allie Stuckey speaking with Alexandria Ocasio-Cortez and asking her a number of questions. The answers, however, are spliced from an interview she conducted for “Firing Line” with Margaret Hoover in a clearly humorous and satirical way.

You can obviously see, right from the beginning, that this is meant as a joke. Yet, as you already know, the left has no sense of humor any more, and thus attempted to pass this off as a purposeful attempt to deceive the masses. Feel free to roll your eyes now.

On Monday, CRTV posted a video of host Allie Stuckey conducting an “interview” with socialist Democratic House candidate Alexandria Ocasio-Cortez. In the video, Stuckey asks questions, and footage from Ocasio-Cortez’s viral interview on “Firing Line” with Margaret Hoover is used for her “answers.” The footage is edited hilariously, humorously making Ocasio-Cortez look like she admits to having no idea what she’s talking about — and it’s obviously satirical.

For example, Stuckey asks, “Do you have any knowledge whatsoever about how our political system works?” and a clip shows Ocasio-Cortez shaking her head “no.” That’s almost as bad as Ocasio-Cortez’s real answers in the real interview with Hoover, where she blasted the Israeli “occupation of Palestine” before admitting she’s not a foreign policy expert and made totally silly claims about U.S. unemployment.

Here’s a first hand glimpse at the stupidity that has sense ensued:

Manipulated video to create entirely fake interview presented as real by verified account here and on Facebook where it has over 1.1 million views in less than 24 hours. https://t.co/P6E5LfQi3K

This faked interview of @Ocasio2018 by @CRTV has nearly 1 million views on Facebook. In less than 24 hours.

Not labeled satire (other than a 😉 emoji).https://t.co/ipUPsOoyLH

NOW “satire??”
You @crtv posted this as a real interview to character-assasinate @Ocasio2018 and when you were found out you had to desperately scramble to “fix it” by adding “satire” in hopes @Twitter doesn’t suspend your fraudulent account.

Yes, folks, it’s true. Liberalism is indeed a mental disorder, a severe one in fact. The Daily Show does this exact same crap all the time and yes, there are people dumb enough to actually think it’s real.

Yet, these brave souls on Twitter are nowhere to be found when Trevor Noah does it. Strange, right?

It’s time for the left to loosen up, to stop being so hateful, angry, and serious all the time. Learn to have some fun and stop crusading 24/7. Your mental health will thank you for it.