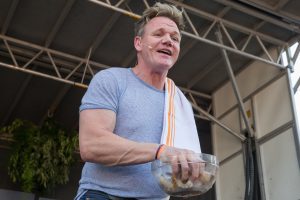 Looks like there’s no good thing in this world a little militance can’t destroy.

Believe it or not, I think vegetarianism and veganism are great diets. Not for me, but very beneficial when done properly. Personal health benefits aside, I’ve got no quarrel with anyone who cherishes animal lives so much that they don’t want to benefit from ending them. Truly, that’s a fine and noble thing, at face value, anyway.

And then there are the militants. The extremists. The people who would sooner resort to cannibalism than kill and eat a deer in some kind of Mad Max survival situation (yes, there are people like that). The people who tie ultra-leftist socio-political values into a flippin’ diet.

So when I stumble upon this Vox article ranking a selection of popular cookbooks by how many animals would be killed to make their recipes, well, I’ve got some things to say about that.

The article, shockingly enough, is actually based on a study in a journal called Food Ethics, leading me to wonder if any taxpayers directly or indirectly contributed to this drivel via research grants. Goodness, I hope not.

Then, using methods I cannot ascertain because I refuse to pay $39.95 for the full text of the study, the authors proceed to count each animal that would need to be killed to cook each recipe in the book and rank each book accordingly.

The authors note that there’s no strong culinary pattern to the findings. The type of cuisine chosen — Mexican versus Indian versus Italian versus Middle Eastern etc. — had little or no effect on how deadly a given cookbook was. The least deadly non-vegetarian cookbook, by Giada De Laurentiis, and the most deadly one, by Mario Batali, were both Italian cookbooks.

“Deadly”. Oh my word. Are we bludgeoning the animals to death with the cookbooks? Let’s choose our words wisely, here.

Instead, the results are driven by how many small animals each chef uses. By far the deadliest cookbook was Batali’s Molto Gusto, with 620 deaths (5.25 per recipe) driven by its use of 567 baby eels. Eels might not be high on your list of animals whose welfare we should care about, but like most species of fish, they probably experience pain and deserve animal welfare consideration.

Hmm, where have I heard the fact that something some people don’t consider to be life worth protecting are failing to factor the ability to feel pain into their considerations? Boy, that’s a real head-scratcher.

Unsurprisingly, Vox’s Dylan Matthews fails to make any sense of the data in a way that is consistently actionable, and the limpwristed, relativistic logic he uses doesn’t help any.

Try to save “a few animal lives,” you know, if you can and stuff or whatever. Quantity over quality.

Personally, I’d rather eat a cookbook than go along with this.