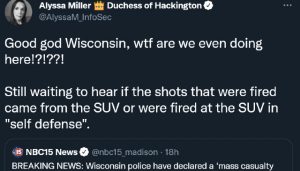 Liberals and conservatives alike took to social media giant Twitter to express their thoughts and feelings concerning the horrific incident that took place in Waukesha, Wisconsin, with the ruthless inhuman leftists stating that the incident might be “karma” for the not guilty verdict in the Kyle Rittenhouse trial delivered last Friday.

There were at least five deaths and 40 people injured Sunday when an SUV drove into a Christmas parade.

“Good god Wisconsin, wtf are we even doing here!?!??!” one self-described advocate tweeted. “Still waiting to hear if the shots that were fired came from the SUV or were fired at the SUV in ‘self defense.'”

“Kyle Rittenhouse flashed white supremacist hand signals, while hanging out with an infamous white supremacist group ( & LE connected) The Proud Boys. So we understand his motivation,” said Tariq Nasheed, a journalist and outspoken figure on social media. “But can anyone show proof that the #Waukesha suspect was a member of BLM, or if it was racial?”

“You reap what you sow, Wisconsin,” one user tweeted, referencing the verdict in the murder trial of Kyle Rittenhouse. “Living in Wisconsin, he probably felt threatened.”

“The horrific violence at the Waukesha Christmas Parade is just heartbreaking,” Sen. Tammy Baldwin, a Democrat from Wisconsin, went on to say on Twitter. “Please keep the victims in your prayers tonight.”

The horrific violence at the Waukesha Christmas Parade is just heartbreaking.

Please keep the victims in your prayers tonight.

“Have the DOJ and FBI deployed to #Waukesha ?”  conservative pundit Sebastian Gorka asked on the social media platform. “Or are they too busy hunting down school moms?”

Have the DOJ and FBI deployed to #Waukesha?

Or are they too busy hunting down school moms?

“If it turns out the asshole that drove through the Christmas Parade in Wisconsin did so because he was ‘angry & confused’ by the Rittenhouse verdict as President Biden expressed in his statement, I hope Biden is blamed for inciting violence,” Kimberly Klacik, a former Republican congressional nominee, stated in her response to the horrific incident. “That statement was reckless.”

“My thoughts and prayers for everyone injured in Waukesha’s Christmas parade,” Sen. Ron Johnson, a member of the GOP from Wisconsin, stated. “My gratitude for all law enforcement, medical personnel, and community members who are responding.”

My thoughts and prayers for everyone injured in Waukesha’s Christmas parade. My gratitude for all law enforcement, medical personnel, and community members who are responding.

“So, how fast will Waukesha now turn into a local news story according to our national media?” conservative thinker and podcast host Ben Shapiro said. “Over/under 6 hours.”

So, how fast will Waukesha now turn into a local news story according to our national media? Over/under 6 hours

The left truly lacks any semblance of real humanity, don’t they?

Nothing is similar between this incident and what happened to Kyle Rittenhouse. And if there was a connection, as in the person responsible for this took action as a result of being angry about the Rittenhouse verdict, he needs to be charged with multiple counts of murder in the first-degree and given the maximum punishment allowable by law.