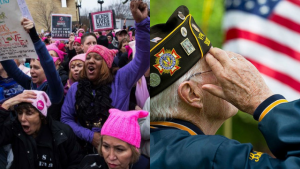 How about we start giving our actual war veterans the respect and honor they deserve before we try to include people who hold up signs, stop traffic, and scream at strangers in the same category?

Dr. Warren J. Blumenfeld, a man who holds a job that decidedly does not involve putting his life on the line to defend liberty around the globe as a professor at the University of Massachusetts Amherst, recently penned an op-ed arguing that activists should be given the same regard as war veterans.

This all came to mind when he noticed a veteran get a 10% discount at a store.

Blumenfeld claims he has “long thought” about “whom our country includes in it’s socially constructed category of ‘veteran,'” and asks: “Can we as a nation begin now to consider expanding the category of ‘veteran’ to include the diplomats and the mediators, those working in the conflict resolution, and activists dedicated to preventing wars and to bringing existing wars to diplomatic resolution once they have begun?”

Blumenfeld does point out that he is “not arguing that everyone be granted retail discounts by expanding our classification of ‘veteran,’ or even that others acknowledge us for our service in working for a better and more just society,” but asks for people to “take a few minute to consider those fighting a cultural and figurative civil war to reduce the violence and injustice and place the United States in higher standing around the world.’”

This bizarre line of reasoning, of course, begs the question: what do actual veterans think of this?

Well, Joey Jones, a retired Marine Corps bomb technician who lost both of his legs faithfully serving his country in Afghanistan, told the hosts of Fox and Friends he thinks it’s “laughable”:

“These men and women — these GI Joes, GI Janes — they are regular people,” Jones added. “They didn’t go to private school, they didn’t get their feelings hurt at the unfairness of things, they chose to serve their country, and they chose to do something that truly transcends these tit for tat politics that we play here in this country.”

“To say this term applies to everyone who might get upset and hold up a sign somewhere, that doesn’t make any sense at all,” Jones concluded.

Blumenfeld later replied to his critics on Twitter with the predictable leftist rant about patriarchy:

Whatever, dude. This “patriarchy” also protects your liberty to say whatever wackadoodle stuff you want to while making six-figures at a comfortable university gig.

Spend a couple of months with our boys and girls overseas and then tell us what you think about the patriarchy.