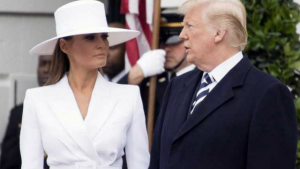 This is not the first time the media has totally lost their minds over the First Lady’s fashion choices. Remember when she walked all the way from the White House to a helicopter in heels as she was on her way to help Hurricane Harvey victims in Houston before changing into sneakers on the plane?

Melania Trump, a former fashion model who would certainly grace the cover of every fashion magazine on the planet, regularly, if her husband were a Democrat, receives little attention in the press other than the occasional mockery of her accent from people who no doubt speak less than four languages fluently, as the First Lady does.

While Trump obviously gives the press lots to work with in the way of early-morning tweets, nicknaming evil dictators, and generally being the bane of their existence, Melanian, who is always the picture of composure, sophistication, and class, rarely provides them much material.

So when FLOTUS appeared at a joint press conference with the French president and his wife during their visit to the White House in a large-brimmed white hat, they saw their opportunity to finally sink their claws into the normally untouchable former fashion model.

A plain, white hat, of which nothing much more could be said than, wow, that’s a big white hat.

But being the skilled masters of the journalistic arts that they are, they managed to craft a woman’s vaguely remarkable fashion choice into an epic story.

“Breaking news from the Associated Press (yes, the news organization that has garnered 52 Pulitzer prizes and is considered America’s primary source for news and information)” writes The Blaze. “‘First lady Melania Trump greets the Macrons with a hat.’ The article went on the mock the first lady’s wardrobe, declaring, ‘Melania Trump’s style evokes Europe roots, not America First.'”

Those Pulitzer prizes were clearly earned by a publication that manages to extract an analysis–and criticism!–on President Trump’s policies from the…hat his wife wore. Sheer brilliance! The very picture of journalistic savvy and skill.

So, to recap, on April 25, 2018, two of the most important stories of the day in the eyes of the mainstream media are a rapper who likes the president and the fact that the First Lady wore a hat.

I cannot wait to see what tomorrow brings!