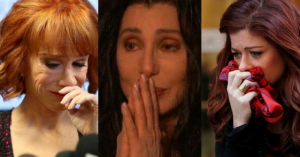 As soon as the news broke Wednesday that Justice Kennedy was stepping down from his seat on the United States Supreme Court, the left busted out the sackcloth and ashes and cries that the end was nigh.

They immediately started envisioning a future in which the Constitution was destroyed, suggesting we get fitted right away for Nazi uniforms.

You know, as if Hillary Clinton was picking the next Justice or something.

They do know that “Constitutional originalist” would actually be dedicated to maintaining the Constitution, right?

Anyway, Breitbart news dutifully collected some of the most hysterical responses from the unhinged (and uninformed) Hollywood elite. Here is a sampling:

The illegitimate POTUS will now try to ram a SCOTUS nominee through before Nov. So much for that McConnell rule. Calling on two principled Republicans to stand up against tyranny.

Every single institution or agency in our government is being dismantled by this administration. Congress, gone, SCOTUS, gone, the Executive branch, in the hands of a madman, the FBI, DOE, EPA, etc. etc. etc. And you thought it couldn’t happen here.

No more playing nice with Republicans because they have never played nice back!! Fight back and fight back smart and till the bitter end!! F$k civility! They ain’t never been civil!! https://t.co/IJcJdIVNiy

It’s actually supremely disturbing that Democrats seem to think the Constitution protects their ideology one minute, and argue for dismantling it themselves the next. They have no loyalty, or even basic understanding, of what the Constitution was created to protect, and what they’re actually lamenting is the fact that, with another originalist in the Court, our government will more accurately represent the spirit of the founding philosophy of our nation.

The difference is that politicians rely on their voters to not understand this. These leftist celebs, who are arguably far more influential than the politicians, simply have no idea, and they’re leading the equally ignorant masses into severely misguided hysteria.

The blind are convincing the blind we’re descending into fascism all because they’d prefer their brand of fascism be upheld by the Court instead.