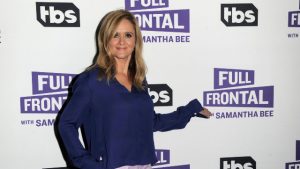 Leftist comedian — who is about as funny as a screen door on a submarine — Samantha Bee, who once referred to former President Donald Trump’s daughter as a “feckless c**t” and got away with it, finally confessed that she takes it easy on President Joe Biden compared to the harsh treatment she gave to Trump and his family.

Bee recently spoke to Dan Rather on his SiriusXM show where she said that she “can’t deny” that she has avoided mocking Biden due to the fact that she approves of much of his political agenda.

“Do you, or do you not, find yourself sometimes at least tempted to kind of pull your punches?” Rather asked the comedian. “In other words, you, myself, and a lot of people, more or less free-swingers against President Trump. But now that Biden is in, I don’t know, do you find yourself sometimes saying, ‘Oh boy, there’s a nasty comedy bit I can unload on Biden,’ but saying to yourself, ‘I approve of him so much I’m going to pull this punch?’”

“I can’t deny that that has happened, I think that’s probably true across the board,” Bee replied. “You’re like, ‘OK, well, we could be making jokes about the infrastructure plan,’ but in general, I’m like, ‘Wow, this is great.’ Why would I purposefully undermine something that seems to be a great idea, pretty much across the board?”

Bee went on to say that she prefers to “make jokes” toward “more worthy targets” while stating that she will unleash on Biden and his administration when she thinks it’s necessary to do so.

“I like to make really targeted jokes,” she stated. “There are more worthy targets right now.”