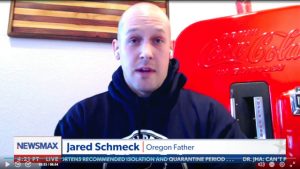 Christmas Eve prank caller Jared Schmeck, who dropped a “let’s go, Brandon” on President Joe Biden himself, explained on Monday that his prank call to the president was more than a “f*** Joe Biden.”

He went on to state that the saying also symbolizes the “frustration with the Biden administration and their policies.”

Schmeck stated during an interview on “Greg Kelly Reports” that the president’s policies that he disapproves of are what inspired him to make the call.

“What’s happening in Afghanistan? They’re not even talking about that anymore. There are still people over there,” Schmeck stated. “You’ve got the supply chain issues, you’ve got the insane inflation rates right now, the federal vaccine mandates, the list goes on, and people are tired of it.”

The slogan references a phrase misheard by an NBC reporter when a NASCAR crowd shouted “f**k Joe Biden,” according to the Independent.

Schmeck said that he had received death threats from Biden supporters upset with him since the Christmas Eve call.

“We’re able to handle this in a humorous manner unlike the other side,” Schmeck went on to add.

The media has also gone after Schmeck, asserting that he invoked a “vulgar right-wing slur” against Biden and his wife. He responded to the attacks by saying that “if we want to talk about vulgarity, we should look at what the Biden administration is doing to this country into the world. “

The left has absolutely no sense of humor, which is why someone pulling a joke like this causes them to blow a stack.

Remember that time when comedian Kathy Griffin decided to post a picture of herself holding the bloody severed head of former President Donald Trump and called it a joke?

That seems a lot worse than what Mr. Schmeck did with his harmless phone call, doesn’t it?

Leftists hypocrisy at its finest.