Lemonade Stands Illegal In Your State? Country Time’s Got You (Or Your Kids) Covered 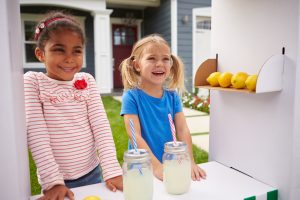 It’s July, and summer is in full swing.

If you’re like me, you’re enjoying as many days by the pool as you can, slowly being overrun with more zucchini than you can shake a rake at, and helping your kids out with a hands-on lesson in math, economics, and business management with a lemonade stand.

Well, that is, unless you’re in any one of the 36 states in which it’s illegal for children to operate a lemonade stand without a license or permit.

Surprisingly, this is one of the very, very few things my home state of New York (as well as California, who makes us look slightly less like a raging leftist dumpster fire) hasn’t banned or taxed yet.

In fact, New York made it a point to pass legislation exempting children under 16 from needing a permit for a lemonade stand after the health department had the everloving gall to shut down a 7-year-old’s stand last year. We were also just granted the right to carry butterfly knives, stun guns, and tasers. It’s turning into a regular libertarian paradise over here!

Sadly, unless you have the nerve to live in one of the nation’s leftist wasteland coastal states or Colorado, Connecticut, Nevada, North Dakota, Nebraska, Missouri, Illinois, Louisiana, Rhode Island, or Vermont, you’re doomed to sit out of one of America’s time-honored free market traditions with your kids without a serious fine.

Unless, that is, you give Country Time Lemonade a call. 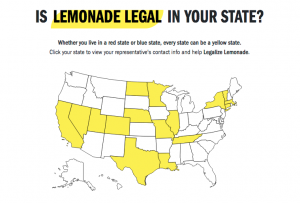 A map of states where it’s legal to operate an unlicensed lemonade stand, according to Country Time. (Photo: Country Time)

“Whether you live in a red state or a blue state, every state can be a yellow state,” reads the Country Time Legal-Ade website, which offers legal aid and fine reimbursement for residents of the United States who are the parent or legal guardian of a child younger than 14 and have been the victims of ridiculous lemonade stand bans.

If you need a permit or have received a fine that complies with Country Time’s list of terms, the company will give you the exact dollar amount to cover the permit or fine up to $300.

Not only is Country Time encouraging children and families to learn the valuable lessons of personal responsibility in a free market that come with running a stand, they are urging families to participate in our representative government by lobbying for lemonade stand bans to be lifted nationwide. Heck, they’re even helping kids get their “molon labe” on and learn how to stick it to the health inspector with printable yard signs that flaunt their freedom and boldly declare that they’re not going to cave to this tyranny.

So much for the whole “greedy capitalist pigs” trope. This is why the free market is a beautiful thing.

Even if you don’t plan on ever operating a lemonade stand with your kids (or if you just plain don’t have any), you are an American, and I dare say it’s your duty and mine to be active participants in our government while we still have that right. Go to CountryTimeLegalAde.com to learn how to fight lemonade stand bans in your own state.

As for me, they can pry my lemons and sugar from my cold, dead hands. ΜΟΛΩΝ ΛΑΒΕ!