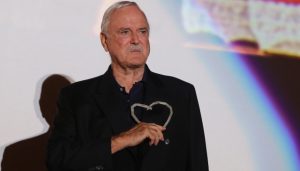 Legendary British actor, John Cleese, famous for his work with Monty Python, is not the kind of guy who shies away from sharing his opinion on the current “woke” trend known as “cancel culture,” going on to tell news media outlet Reuters last year that he believes it “misunderstands the main purposes of life which is to have fun.”

“Everything humorous is critical. If you have someone who is perfectly kind and intelligent and flexible and who always behaves appropriately, they’re not funny,” the 81-year-old actor went on to say, adding, “The problem with political correctness [is that comedians] have to set the bar according to what we are told by the most touchy, most emotionally unstable and fragile and least stoic people in the country.”

The actor has also put legislative speech suppression on blast as well, saying back in October that a current Scottish hate speech law would damper creativity.

“It’s disastrous to the creative process because the creative process above anything else is a matter of spontaneity,” Cleese explained. “I mean, if you’re gonna come [up] with something really interesting artistically, it’s gonna come out of your unconscious, and if you’re having to, what’s the word, edit everything you say before you say it, then nothing is gonna happen creatively — and also things that are rather lovely and funny in ordinary conversation, they’re not gonna happen either, because everybody’s thinking ‘Ooh, somebody might offend.’”.

Now, the comedian is putting his money where his mouth is, releasing a documentary series on what cancel culture is and how it impacts its victims.

Cleese promised in a statement covered in Variety that “Cancel Me,” which will air on the U.K.’s Channel 4, will answer the question of  why “a new ‘woke’ generation is trying to rewrite the rules on what can and can’t be said.”

“I’m delighted to have a chance to find out, on camera, about all the aspects of so-called political correctness,” Cleese said in his statement. “There’s so much I really don’t understand, like: how the impeccable idea of ‘Let’s all be kind to people’ has been developed in some cases ad absurdum.”

Cleese explained that he wants to bring the reasoning behind cancel culture “out in the open” so that the public will be better able to discern what “they agree with, what they don’t agree with, and what they still can’t make their mind up about.”

Danny Horan, an executive at Channel 4, said at the Edinburgh TV Festival that the network chose Cleese because he’s known for his strong views on cancel culture and the network felt it was time to address the issue.

“I think there’s a lot of things to address in that series that he is very keen to understand what happened and why it’s happened,” Horan went on to state. “And of course, you know, he was a comedian for the last few decades who had a lot of comedy [some of which now] feels outdated so he’s questioning some of that as well. So I think it’d be really interesting. It’s an area that he’s exploring.”

Cancel culture is a cancer that is eating away at out society as it continues to poison not only our creativity, but our ability to even discuss important issues with one another, as anyone who dares to have an opinion not accepted by the liberal mainstream in the country is slandered, libeled, and considered an enemy of the left.

Here’s to hoping Cleese’s series will help wake folks up to the dangers of cancel culture before it is able to do even more damage to society.