Legendary Actor Morgan Freeman Says ‘If You Trust Me, You’ll Get The Vaccine’ 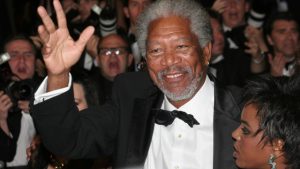 CANNES, FRANCE – MAY 18: Actor Morgan Freeman attends the screening of ‘Sin City’ at the Grand Theatre during the 58th International Cannes Film Festival May 18, 2005 in Cannes, France

Actor Morgan Freeman is now advising his fans who “trust him” to get vaccinated against the coronavirus because he supposedly believes in science.

“I’m not a doctor, but I trust science,” the legendary actor stated in a public service announcement made for Creative Coalition, a nonprofit arts advocacy group. “And I’m told that, for some reason, people trust me.”

“So here I am to say, I trust science and I got the vaccine,” he went on to say. “If you trust me, you’ll get the vaccine. In math, it’s called the distributive property. In people, it’s called taking care of one another. Get the vaccine. Help make our world a safe place for us to enjoy ourselves again. Please?”

The Academy Award- and Golden Globe-winning actor, who twice played God in “Bruce Almighty” and “Evan Almighty,” has lent his rich, authoritative baritone to many documentaries and specials.

An ad released today by the Hillary Clinton campaign – the second narrated by Morgan Freeman – lists off the names of faux black martyrs exploited by the left via the Black Lives Matter movement to portray America as a deeply racist society hostile towards them.

With a somber piano melody sounding as if extracted from a mournful movie portraying the Holocaust, Clinton’s voice is processed to sound echoing and distant as she reads the names Trayvon Martin, Dontre Hamilton, and Sandra Bland.

So apparently it’s not just the mainstream media that serves as the main creator of propaganda for the Democratic Party. Hollywood actors are now getting in on the action.