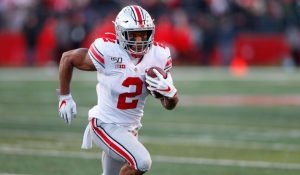 Pro-aborts are having a conniption fit over a college football announcer who dared to mention the fact that Ohio State’s star player was nearly aborted by his mother.

In what any normal person would view as a heartwarming anecdote, Fox Sports announcer Gus Johnson explained how the life of J.K. Dobbins, the Buckeyes’ record-breaking running back, could have been snuffed out in the womb.

“J.K. Dobbins’ mom, Mya, became pregnant when she was 18 years old,” Johnson said during the Saturday night game against Michigan’s Wolverines. “She went to the doctor because she was thinking about aborting the baby, but changed her mind.”

“That baby turned out to be that young man, J.K. Dobbins, who she calls her miracle baby,” Johnson continued.

Wow! A @CFBONFOX football announcer just shared that the mother of star @OhioState player, @Jkdobbins22, walked out of an abortion facility & rejected abortion after becoming pregnant at 18.

"The baby turned out to be that young man… who she calls her 'miracle baby.'"

Of course, it’s the ultimate faux-pas in today’s woke culture to utter anything other than the highest praises of the act of killing an unborn child. So, naturally, leftists cringed at Johnson’s statements.

Gus Johnson owes JK Dobbins and his mother an apology. How disgusting. @FOXSports

Why on earth Johnson should apologize for praising Dobbins’ mother is beyond comprehension, but we’ve come to expect that from the left.

Why is it necessary to discuss a mother’s reproductive choices to extol the talents of a brilliant player?

So weird. So stigmatizing. So WTF. pic.twitter.com/Txl5TYYcZh

Perhaps it could have something to do with the fact that the “brilliant player” would never have become such if he’d been murdered before his birth?

As for Dobbins, he has yet to issue a comment on Johnson’s retelling of his story. Thus far, his only word on the game has been a simple offer of praise to God:

Thankfully, the backlash for Johnson’s comments is markedly minor—apparently, only a handful of folks are idiotic enough to get riled up about what is obviously an uplifting, life-affirming story.

The fact that there is any backlash whatsoever, though, is ridiculous. How have we come to live in a society in which it’s perfectly fine to brag about having an abortion, but sharing a story of choosing life is offensive?