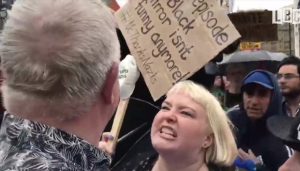 Earlier this week when President Trump visited Great Britain, liberals came out of the woodwork to protest his presence in their country, however, these weren’t exactly peaceful protests.

In fact, two individuals were assaulted, one of which was “milkshaked,” and called “Nazi scum” by an obnoxious female protester in the angry mob.

Well, as it turns out, that particular individual, the one who screamed “Nazi scum,” received a heck of a lot of backlash for her actions. It was so severe she left her job and has deleted all of her social media accounts.

A Trump supporter is milkshaked by a hostile crowd in Parliament Square.

The Daily Mail identified the woman as 34-year-old Siobhan Prigent and said she apologized for her actions before deleting all her social media accounts.

“I am very sorry for my behavior today. I should have protested peacefully and I didn’t, and I regret that,” she posted on Twitter, the outlet said. “I’ve let myself down and I do understand that fully. There are two sides to every story, but my actions were my own, and that’s on me. Please leave my family and friends out of it.”

But the Daily Mail also reported that her apology came just hours after she tweeted an expletive-filled message about Trump supporters: “The MAGA c**** get a police escort #NoThanksNazis #TogetherAgainstTrump #DumpTrump.”

Prigent couldn’t be reached for comment, but online she identified herself as an “intersectional feminist” and a “crazy cat lady,” both of which go to great lengths in explaining her ridiculous behavior.

Apparently, she’s walked away from that job after the incident as she doesn’t want to bring negative attention to UCLH or the NHS.

This woman is representative of a growing trend among liberals who can’t seem to exercise restraint and self-control when they are out “saving the world” with their anti-Trump protests.

It doesn’t take much to be a decent human being and just agree not to hurt people because they think differently than you. Instead of being so full of hatred and violence, perhaps sitting down with Trump supporters and having a conversation about the issues, calmly, would do a much better job of building understanding?

Just some food for thought.