Leftist Twitter Melts Down Over…A Prom Dress (Can You Guess Why?) 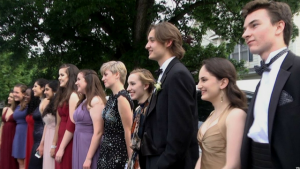 If the most oppressive thing you can find to call out is someone wearing a dress, you have a pretty good life!

Read that again and let it sink in. We’re officially complaining about a prom dress.

The unforgivable sin of this teenage girl’s dress? She’s white. The dress is, apparently, in the Chinese “qipao” style, which this young lady clearly found flattering and beautiful.

But you see, because she’s not white, she’s not allowed to find the dress flattering and beautiful, at least not to the point that she’d dare to actually wear it out in public.

Nevermind that Asian cultures have been mimicking Western styles for Centuries or that the people who swarmed her with whiny, utterly entitled complaints on Twitter were most likely not sitting in Chinese-style huts wearing entirely traditional Chinese garb, eating rice out of traditional Chinese pottery with chopsticks. No, someone wearing Western clothing and enjoying all the perks of Western culture wanted to be the culture police and lecture an 18-year-old girl about her prom dress.

The rant began a few days after Keziah

Well, because it’s 2018 and no one can do anything without offending someone, one Jeremy Lam on Twitter, who is, as one would guess from his angry Tweets, of Chinese heritage, absolutely flipped out on the poor girl, despite clearly not knowing who she is.

We are also assuming, although we can’t be sure, that from where he was sitting he was not being directly oppressed by the dress.

This delicate snowflake proceeded to lecture the prom-goer about the history of the dress and how it represented women’s liberation or something, but still, she shouldn’t wear it, because cultural appropriation, of course.

His thread was full of snowflake meltage and virtue signaling white people prostrating themselves to his infallible wisdom as a person of color. All hail intersectionality.

It is curious, however, that Lam seemed to have missed that the entire concept of cultural appropriation is decidedly Western; he also appears to be unbothered by the baseball cap in his profile picture, quite possibly the most Western clothing item in all of history (other than the cowboy hat).

But sense and logic don’t matter, because someone was offended! Pestering a high school girl who thought a dress was cute is perfectly acceptable, no matter who you are, if you have been a victim of the sin of cultural appropriation!

The silver lining of this story is that the young lady who was attacked, Keziah, refuses to back down. She’s kept her post up and maintained that she wore the dress because she appreciates Chinese culture.

To everyone causing so much negativity: I mean no disrespect to the Chinese culture. I’m simply showing my appreciation to their culture. I’m not deleting my post because I’ve done nothing but show my love for the culture. It’s a fucking dress. And it’s beautiful.

She’s been bullied by hundreds of thousands of people at this point, but she’s refusing to take her post down, condemning the droves of SJWs who showed up to bash her.

Well, well, maybe there is hope for future generations after all! The social justice army might just see their methods finally blow up in their face once and for all.