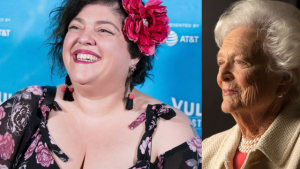 Never have I seen a better example of the expression, “pride proceedeth the fall”!

This week, an angry professor who took to Twitter to cheer the passing of former lady Barbara Bush this week, and as you may have guessed she did indeed lean to the left. Far to the left.

She presents such a stunning example of the current state of the radical, keyboard warrior left, that one day, if perhaps the expression “SJW” ever makes it into the dictionary, there’s a good chance you will see her picture next to it.

Randa Jarrar, a professor at Fresno State, attracted quite a bit of attention to herself this week (the SJW loves attention) by her crude rant against the passing of Mrs. Bush, particularly because of the way she dramatically doubled-down on her remarks once her significant lack of class was pointed out.

Unfortunately for Jarrar, her confident claims that she couldn’t get fired for said crude rant might not be so true after all.

“Barbara Bush was a generous and smart and amazing racist who, along with her husband, raised a war criminal. F*** outta here with your nice words,” the initial tweet read.

“PSA: either you are against these pieces of s**t and their genocidal ways or you’re part of the problem. That’s actually how simple this is. I’m happy the witch is dead. Can’t wait for the rest of her family to fall to their demise the way 1.5 million Iraqis have,” she followed up.

“All the hate I’m getting ALMOST made me forget how happy I am that George W Bush is probably really sad right now,” she added when people responded as any decent person would.

“I’m using [woke points] to dance happily on the grave of someone I despise,” she added. (What’s a woke point?)

When the reasonable question arose as to whether it was appropriate for a professor to publically express such views and remain employed, she replied, “I work as a tenured professor. I make 100K a year doing that. I will never be fired. I will always have people wanting to hear what I have to say.”

Jarrar, as her grand finale, ended up tweeting out a phone number, giving the impression that it was her own. The thing was, this number happened to be Fresno State’s suicide crisis line, which consequently was flooded with calls after her tweet, presenting the very real possibility that someone who legitimately needed to get through to the crisis center may have been unable to.

As to her confidence in her job security, Provost Lynnette Zelezny, recently asked by the Fresno Bee about Jarrar’s claim, replied “does tenure mean that you, technically, cannot be fired? The answer to that is no.”

“A professor with tenure does not have blanket protection to say and do what they wish,” Fresno State President Joseph Castro said regarding Jarrar, according to the Bee. “We are all held accountable for our actions,” adding that Jarrar’s words were “beyond free speech” and “disrespectful.” He did, however, add that “one set of tweets, as horrible as they were, do not define us.”

To top off this epic SJW implosion, a series of racist tweets were uncovered following her rants, all as profanity-laced as her thoughts about the late First Lady.

Sorry sister, you might have overstepped your bounds, even by leftist standards! Maybe you’ll think twice about grave dancing the next time around.