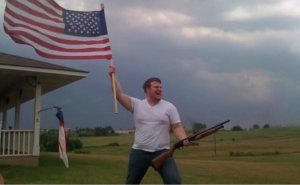 You probably haven’t heard of The USA Singers. Neither had I until just now, and I was perfectly fine without knowledge of their existence.

The self-described “virtuoso performers” of ultra-leftist “resistance music” may have finally bumped themselves onto the national radar, but not exactly for the best reasons.

Let me give you a little context.

You see, America is smack-dab in the peak of tornado season, and the folks who live in the region lovingly nicknamed “Tornado Alley” are still battening the hatches and camping out in their basements in hopes that their houses don’t lift off and land in some technicolor paradise on top of a red-shoed witch.

I jest from my safe space in New York, but only because my good-humored friends in the scary red zone on weather maps have demonstrated that a tasteful joke here and there helps make the sirens, the darkened skies, and the terrified looks on your children’s faces just a tiny bit easier to bear.

The USA Singers, however, took tastefulness and tact to a whole new level. A disgustingly low level.

Apparently, part of their mission to “make America great again” involves mocking those in danger for denying climate change, voting Republican, and praying to God to protect them from severe weather:

200 tornadoes hit the Midwest this week in states that vote for politicians who refuse to recognize the reality of climate change & the extreme weather that it produces.

Meanwhile, they’re all praying for help.

Now, it doesn’t take a whole lot to make me feisty, but this kind of nonsense is enough to make anyone go nuclear.

Are they seriously making the sweeping generalization that victims and survivors of those 200 tornadoes are all conservative voters, that they are somehow getting what’s coming to them for denying climate change, and that their prayers for help are somehow funny?!

This is some next-level hate. These people have managed to politicize tornado season and used it as an ideological weapon against conservatives. What on earth. I need an aspirin.

Thankfully, the fine folks over at Twitter set these nimrods straight. Enjoy:

Smug ignorance of weather and science, mocking those who pray while misunderstanding, glee in destruction: hope your tunes are this good. https://t.co/SqoyNjWvyi

I checked. They’re not.

Points to this guy for bold honesty.

How many tornadoes will fail to materialise if everyone votes Democrat?

Better yet, get everyone in Tornado Alley a copy of The Secret. Just as effective as voting Democrat, but without losing any moral high ground.

Somebody forward that handy little map over to AOC, stat!

And they know how you vote!!!

This is the scariest concept since Sharknado.

Perhaps you might check the history of large tornado outbreaks. Start with 1974 and go from there. Oh, and that was when you folks proclaimed global cooling was a definitive thing by 2000.

It hurts to be fact-checked, doesn’t it?

It's been widely reported that an increase in tornadoes is due to advancements in technology that allow more of them to be detected, specifically in areas with little population. But sure, stick to your talking points…

And, lastly, my absolute favorite and the nail in the coffin of the USA Singers’ incredibly crass error in logic:

Then you have to wonder how many homes that were destroyed belong to democrats, you shallow thinker.