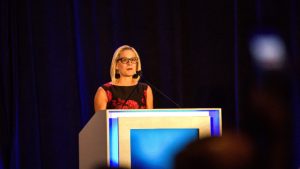 A group of radical left-wing activists will be giving Sen. Kyrsten Sinema a run for her money at the Boston Marathon on Monday, as they plan on “birddogging” her over her opposition to President Joe Biden’s spending bill.

As of this writing, it’s not certain whether or not Sinema, who is an athlete herself, will be watching or running in the marathon. She qualified for the race, but broke her foot during another marathon earlier in the year. A spokesperson for her office has not returned requests for comment about how she will be participating in Monday’s event.

Sinema has faced growing pressure from activists and was recently confronted in a Washington, D.C.-area airport and a bathroom at Arizona State University, where she is a lecturer, with immigration activists filming Sinema and her students.

Democrats in Congress are still trying to reach an agreement on the bill, leaving them without the necessary votes to actually pass the legislation into law, at least for the moment, due to the fact they have such slim margins in both the House and the Senate.

Sen. Joe Manchin of West Virginia has stated that he will not be supporting a bill that surpasses $1.5 trillion. And that’s on top of the $1.2 trillion infrastructure bill that already passed the Senate with bipartisan support, which the president says must be connected to the larger spending bill.