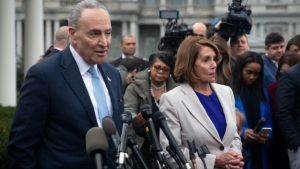 Last week, the largest stimulus package in the history of the United States was passed, providing $2 trillion as a form of relief for the economic pressures put on everyone who has had their jobs put on hold while we all self-isolate as a means of flattening the curve of the coronavirus.

That’s a pretty darn big number. One that many folks would call a bit excessive, prompting much debate about whether or not putting young, healthy, working folk in self-isolated quarantine was really the best option for stopping the spread of the disease due to the economic damage it is currently causing.

Well, apparently, lawmakers in Congress don’t think $2 trillion was quite enough to do the trick, so they’re now thinking about another coronavirus relief package to along with the first one.

The latest indication came Monday, when Treasury Secretary Steven Mnuchin said he would be willing to ask Congress for more money for small businesses and those in the private workforce should it be necessary.

A key piece of the $2.2 trillion relief bill passed last week is $350 billion in funding for small businesses. Businesses with fewer than 500 employees are eligible for up to $10 million in loans, which can be used for payroll and other expenses, like insurance premiums, mortgages, rent or utilities.

“This is a very popular program with Republicans and Democrats, and the president likes it a lot,” Mnuchin told Fox Business’ Stuart Varney Monday. “If we run out of money, and this is a huge success, we will absolutely go back to Congress and ask for more money.”

So the folks in Congress must be aware of the location of some sort of magical garden where money grows on wild vines like grapes, because they apparently think a never ending supply of cash is at their total disposal.

We the taxpayers are going to have to pay for all of this money being used for these stimulus packages. And of course the Fed is going to be printing money like crazy so inflation and the cost of living are going to end up skyrocketing when this is all said and done.

Again, how far do we push the guidelines meant to fight this virus before we say enough is enough? Sure, some form of support is needed to help balance things out, but we also need to look at the longterm picture. Putting people out of work for a long time like this is devastating the economy. Perhaps there is a better approach than the one we are currently taking?

Regardless, this is a really tricky situation to navigate.

Senate Minority Leader Chuck Schumer is all on board with doing another bill.

“I think the odds are we’ll need more legislation. First, we don’t know the extent of the crisis in terms of the magnitude, so that could rise. But there are going to be problems that we don’t realize now that we’re going to have to grapple with,” Schumer told reporters for The Hill. “So I think the odds are high there will be a COVID-4.”

House Speaker Nancy Pelosi has also expressed a desire for a second bill. Which makes total sense because it is a second opportunity for her and other liberals to try and attach all sorts of items from their wishlist onto the bill and try and push it through Congress.

I’ve said it a million times, I’ll say it a million more. They really do buy into the idea of “never let a crisis go to waste.”