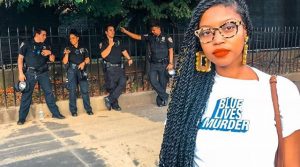 Law enforcement officials and groups are now calling for Amazon to take down items that are being sold on its website that feature a “Blue Lives Murder” slogan.

“It’s disheartening that your company would allow this disgusting motto on your sales platform,” Brian Olsavsky of the Detectives’ Endowment Association stated in a letter that was addressed to Amazon’s chief financial officer.

Olsavsky stated that he was made aware of the items and the awful, disrespectful tagline and that it was disparaging and would only serve to worsen the relationship that local communities have with law enforcement.

“It has come to my attention that your website is selling tee-shirts (sic) and other items emblazoned with the words ‘Blue Lives Murder,’” Olsavsky said in his call for the items to be taken down.

The “only purpose is to invite further division, hatred, and violence toward the hard-working men and women of the nation’s Police Departments, who are toiling every day to keep their communities safe,” Olsavsky stated.

Such items, which include T-shirts, face masks, and vinyl stickers, also put law enforcement lives at risk, according to Olsavsky.

“To continue to hawk products emblazoned with this vile phrase puts the lives of Police Officers, and all law enforcement nationwide, at peril and risk,” he went on to say.

Retired Las Vegas police officer Randy Sutton criticized Amazon’s decision to continue selling the products, saying CEO Jeff Bezos is “so engaged in profit or he is simply tone-deaf to what is happening across America.”

“I know that Amazon is a huge company, and I understand that a company does not have a soul: I get that. But companies are made of people, and Jeff Bezos is a human being, is a person,” Sutton went on to say during an appearance in a segment of “Fox & Friends.”

“I believe somewhere in there is maybe someone that has humanity. What he’s demonstrating here is either he is so engaged in profit, or he simply is tone-deaf to what’s happening across America and the plight of American law enforcement officers who literally are being demonized and dehumanized by the Left,” he then added.

The t-shirt with the “Blue Lives Murder” shirt sold on Amazon has largely received negative results, which is a good sign. The majority of America is not down with this kind of dangerous and divisive rhetoric.

Sixty-five percent of people gave the product a 1-star rating, with reviews calling it “UnAmerican,” “hate speech,” “trash,” “distasteful,” and something that “promote[s] hatred and intolerance.”

The slogan is a reference to a pro-police movement, “Blue Lives Matter,” which was started in response to growing anti-police sentiments that came from the “Black Lives Matter” movement.

This is just in poor taste. Not many individuals in this country are buying what liberal Democrats are selling, thankfully.