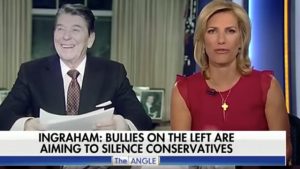 Fox News host Laura Ingraham continues the battle to keep her show on the network afloat after getting into an online spat with Parkland survivor and raging anti-gun liberal David Hogg.

Ingraham returned to the air this week after a short hiatus from the network due to a Twitter altercation — yes, those are real things now, welcome to the 21st century – led to a call for a boycott from advertisers for her show.

Many advertisers opted to go along with the farce and ditched her program.

Well, it doesn’t look like things are going to get better any time soon.

Ingraham took the left to the woodshed over their constant war on free speech, which apparently didn’t sit well with Blue Apron and SlimFast, both of which pulled their advertisements from the show.

SlimFast made the announcement via Twitter saying, ” We have stopped advertising on the Laura Ingraham show and have no plans to resume in the near future. We are also monitoring all ad placements carefully.”

We have stopped advertising on the Laura Ingraham show and have no plans to resume in the near future. We are also monitoring all ad placements carefully.

Blue Apron wasn’t too far behind:

We were unaware that our ad would be running on The Laura Ingraham Angle last night. We will no longer be advertising on the show, and will be working with our media buying partners to more closely monitor where our ads appear going forward.

Now, of course, these companies can choose to advertise with whoever they wish and there’s nothing wrong with that. However, that doesn’t mean their actions come without consequences.

It’s not a matter of whether or not it’s “legal” for companies to do this, but if it’s really a good idea to alienate a huge demographic of consumers who might have been forking over their hard earned cash for your products.

The answer, of course, is no. It’s really not. And there’s no doubt both companies will live to regret their decision when conservatives go elsewhere to spend money.

There’s an open hostility in today’s world where people want to live in a bubble or echo chamber surrounded by sycophants who feed them the same worldview over and over again.

It seems people are afraid to have their positions challenged, to be faced with an opposing view and be forced to articulate an intelligent argument and defense of a particular belief.

However, it’s this sort of confrontation, the battle of ideas, that has led to the progress we’ve made as a nation. If that disappears, we’ll stagnate and then nobody wins.

If only folks understood this.