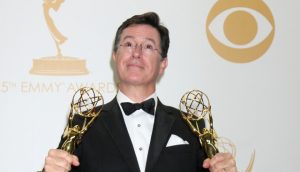 CBS announced on Monday that “Late Show” host Stephen Colbert is set to bring back a live audience for the program starting June 14.

It’s being reported that Colbert has not had a live studio audience for the show for the last 205 episodes. Colbert actually hosted the nightly program from his home, but has now moved back into a room located at the Ed Sullivan Theater, the location where the show has been filmed for a long time.

The Daily Wire reported via Variety:

The return will be done in adherence to New York State’s adoption of CDC guidelines for fully vaccinated individuals and has been reviewed by the state officials. Guests will be required to show proof of being fully vaccinated prior to entering. Face masks will be optional. All staff and crew members will continue to be tested prior to commencing work on a regular basis, as well as screened daily for symptoms. In addition, a COVID-19 compliance officer will be on staff to monitor and enforce all health and safety protocols.

“Over the last 437 days, my staff and crew (and family!) have amazed me with their professionalism and creativity as we made shows for an audience we couldn’t see or hear,” the late night host proclaimed in the statement. “I look forward to once again doing shows for an audience I can smell and touch.”

Last March, Colbert was the first host of a late-night show to return to broadcasting and notably performed his monologue from his bathtub.

Additional shows have returned to pre-pandemic traditions recently, as well. NBC’s “Saturday Night Live” broadcasted its show in front of a full, live group of people at its Studio 8H at the network’s Rockefeller Plaza headquarters. The network had reportedly been bringing in small crowds of audience members, including first responders, in order to experience the show socially-distanced. Bill Maher’s “Real Time” on HBO has incorporated the use of smaller, live groups of people.

How many people are still watching this late night stuff? It’s all become a platform for social justice warriors to peddle their “wokeness” to fellow liberal audiences at the expense of conservatives who are regularly lampooned on these shows.