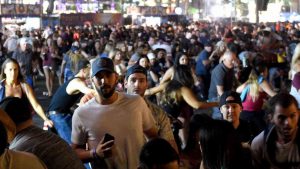 Our thoughts and prayers are with everyone directly affected by this tragedy!

On Sunday night, at around 10 p.m. local time, a suspected lone gunman identified as Stephen Craig Paddock opened fire at the Las Vegas Route 91 Harvest country music festival, killing at least 50 people and injuring at least 200 others. Victims’ names have yet to be released, but Las Vegas Sheriff Joe Lombardo has confirmed that one officer was killed and another remains in critical condition. Paddock was eventually killed by officers. (UPDATE: Reports now say Paddock committed suicide when police stormed his hotel room.)

The massacre is the worst mass shooting in U.S. history.

Reports are continuing to pour in, but here’s what we know about the alleged shooter and a female companion, person of interest Marilou Danley, in the case so far.

1. The shooter, Stephen Paddock, was a 64-year-old local man from Mesquite, Nevada, and was “known by police.”

NBC is reporting that Paddock "was known to local law enforcement". No sure about any arrests, etc but they knew of him in Mesquite.

There have been reports that the gunman lived in a retirement home, though this remains unconfirmed. His hometown, Mesquite, is a small town that contains a few retirement communities.

See the confirmed image of Paddock from companion Marilou Danley’s Facebook page, below:

3. According to Las Vegas Sheriff Joe Lombardo, the motive remains unclear but is not suspected to be terrorism, meaning it was likely not associated with a political or religious aim.

“No,” said Sheriff Lombardo, when asked the massacre was a suspected “act of terrorism.”

“Not at this point,” he said. “We believe it was a local individual. He resides here locally. I’m not at liberty to give you his place of residence yet, because it’s an ongoing investigation, we don’t know what his belief system was at this time. … Right now we believe he is the sole aggressor at this point and the scene is static.”

4. Paddock was suspected to be the lone gunman, but officers have identified and found a person of interest, the shooter’s female companion Marilou Danley.

Danley, 4’11 and 111 pounds per Sheriff Lombardo, was reportedly traveling with Paddock, and has been located by officers.

Las Vegas shooting update:Woman of interest, Marilou Danley believed to have been located. "Cache of weapons"found in shooter's room. #9news 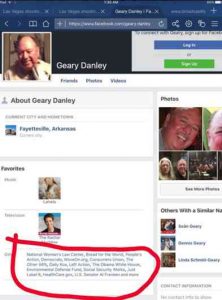 Police have detained his companion, Marilou Danley, but do not believe she is connected to the shooting.