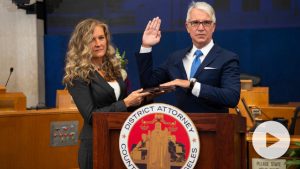 The new district attorney for the city of Los Angeles wants to drop special circumstance allegations against a man who has been charged in the shooting death of an off-duty law enforcement officer who was shot in the head, according to new reports.

“Completely in shock, I can’t even tell you, my heart just dropped, I couldn’t believe it,” Christina Solano told reporters from Fox 11 Los Angeles. “He should be there for the families, we are the victims here, not this person who shot him. I don’t understand what his purpose is to let these murderers out of jail, I don’t get it, he’s like the Devil, I don’t understand it.”

The suspect, Rhett Nelson, 31, from the state of Utah, was accused of walking up to Solano while he was at a Jack in the Box restaurant in Alhambra back in June of last year and shooting him in the back of the head. Solano, 50, died just tow days later.

After his arrest, Nelson was charged with two counts each of murder and second-degree robbery as well as one count of attempted murder.

His case also included special circumstance allegations of multiple murders and murder by means of discharging a firearm from a motor vehicle as well as allegations of using a handgun in the commission of the crimes.

As charged, Nelson faces a maximum prison sentence of life in prison without the possibility of parole, Fox 11 reported.

Without the special circumstance allegations, Nelson faces a sentence of at least 40 years and be eligible for parole, according to the station.

This is certainly not a good look for Gascon. A murderer, especially one who killed two people, deserves to have the death penalty. Taking a human life is the highest assault on the person of God that a human being can commit.

It’s time we stopped coddling criminals and took proper action to ensure our streets are safe. This is something that Gascon doesn’t seem to understand.