Larry Elder Has Message For CA Gov. Newsom; Says He Should Be ‘Scared To Death’ He Entered Recall Race 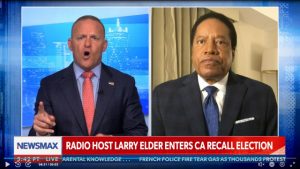 Larry Elder, a popular California attorney, writer, and conservative radio personality, recently stated during an interview that California Gov. Gavin Newsom should be “scared to death” that he has now entered the recall race in the state.

“All I know is after the rumors got really loud that Larry might enter the race, all of a sudden (the) Service Employees International Union (California) dumped $5 million into the anti-recall side. He ought to be scared to death,” Elder said during an episode of “Stinchfield.” “When I talk to people. They’re mad about crime. They’re mad about homelessness. They’re mad about the rising cost of the living.”

The Republican entered the race Monday, just four days before the July 16 deadline for candidates to file, and joins other Republican hopefuls including Caitlyn Jenner, former San Diego Mayor Kevin Faulconer, 2018 gubernatorial candidate John Cox, and former Rep. Doug Ose to replace the Democrat Newsom should a majority of votes are cast to recall him from office on Sept. 14.

A grassroots effort garnered 1,719,943 of the 1,495,970 recall petition signatures required to set the special election, according to Ballotpedia.

Under the California recall process, two questions will appear on the September ballot.

The first asks if Newsom should be recalled and the second, if the first receives a “yes” majority, would pick his successor out of the candidates that have filed.

The winning candidate does not need a majority of votes, but the highest plurality to succeed him.

Recall supporters have turned against Newsom due to his lackluster response to the COVID-19 pandemic, the spike in violent crime, homelessness, and other issues that he has failed to address.

Elder stated that the reason he’s running for office is because the state is not a place where people can really afford to work and live.

“For the first time in our state’s history, we’ve had a net migration out of California by native Californians. People have had it. They are going to places like Tennessee, like Florida, like Texas,” Elder went on to say. “California has the worst rating in which to do business, based upon taxes, based upon spending, based upon an anti-business attitude, we’re releasing 20,000 prisoners because of COVID while we’re treating a contractors and builders like felons, it’s insane.”

He then said that the “step to the middle class” is all about education, but around 75 percent of black children in the state cannot read at the state level of proficiency, while Newsom’s children are receiving a private education.

“Why aren’t you doing something about this,” Newsom asked.

“Why is it that you’re allowing people to demonize the cops who are now pulling back,” he concluded. “Much of policing is discretionary, you don’t have to get out of the car when you see bad guys doing something. All you have to do is enter the call to get your paycheck, as a result, after pulling back, it’s called the Ferguson effect, and crime is going up. Bad guys know it.”