Lara Trump Hints At A Senate Run In North Carolina 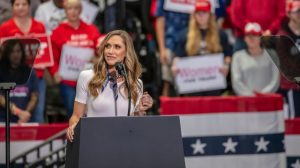 President Donald Trump’s daughter-in-law, Lara Trump, wife of Eric Trump, has hinted that she might be considering a Senate run in the state of North Carolina during her appearance on both the Fox News and Fox Business networks.

If you listen closely you can hear the sound of leftists all across America screaming and crying at the thought of another Trump being in a political office. Aren’t those tears delicious?

“Let’s get through this one, and then we’ll talk about the next one,” she said on Fox News when asked when she will decide she is going to run for Senate. “It would be an incredible thing. It’s my home state, a state I love so much, and look, I think we need some strong Republicans in Washington, D.C. We had a great run with the Senate and the House this go around but, I don’t know, let’s see what happens.”

A few minutes later, Trump appeared on Fox Business network and confirmed that she has thought about ruining for office in that state.

“I was born North Carolina, it is my home, my team still lives there,” Trump said when asked if she would run for office in the state. “It’s something that I certainly have considered. I think it’s a little too soon to make an ultimate decision on that, but, you know, it would be an honor to represent the people of my home state.”

Trump was actually born in the state and actually named her daughter Carolina. So it seems she really loves her home, and that means she would be more inclined to do what’s best for the people who live there.

Trump also hinted at a run in the Fox Business interview after being asked whether the “verbal abuse” and criticism that her family has endured has made her want to avoid politics.

“It is a consideration that I think we all have to think about — would we ever want to put ourselves through all the things you just described?” Mrs. Trump said. “They have been absolutely brutal to every member of our family. They make up lies about us; they write completely unfounded stories about us.”

“We all have also seen the great side of things, which is that you can affect positive change for so many people by holding a position like the president has, by holding, you know, congressional or Senate seat. So many possibilities to make life better for people,” she said. “Although they have, obviously, done everything they can to try to dissuade us from doing those things, possibly running in the future — look, I think we all know the really positive side, the way you can impact people’s lives, so I don’t think you can ever rule anything out.”

The media will no doubt have it out for Lara Trump if she decides to run, simply because of her last name. Given how much hatred the left has for the Trump family, there’s no way she’ll be given a fair shake.

In other words, if she really wants to do this, Mrs. Trump needs to be prepared to fight and get bloody. Nothing else will do.