Lady Gets Engaged to Her Light Fixture 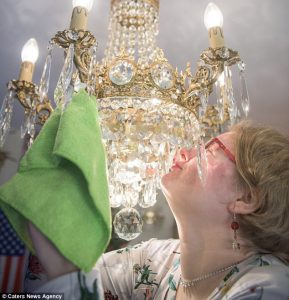 You can’t buy love. Or can you? An Englishwoman recently became engaged to her chandelier.

Amanda Liberty, 33, of the UK, said she proposed to her favorite light fixture on Valentine’s Day while continuing an open relationship with the rest of her collection of 25 chandeliers.

Yes.  You’re reading this correctly. Her chandelier. She proposed on Valentine’s Day and claims to be engaged although no witnesses heard the light fixture actually say “yes.”

“You can’t control who you fall in love with and things just went from there,” Liberty told Caters News.

For Liberty, apparently you can find love on EBay.

“I couldn’t stop thinking about her and how beautiful she was — she has such a beautiful shape, and I could feel really amazing energy coming from her,” Liberty said. “Although I knew it would be tricky to get her home, I knew I needed to find a way to make her mine.”

“None of my chandeliers are jealous of each other, they understand that I love them all for all of their different personalities,” she said. “For example, I love kissing and cuddling Lumiere, but I sleep with Jewel every night, as she is portable and very nice to cuddle.”

Luna, the first chandelier she purchased, helped her discover her attraction to lights that hang.

However, Liberty, who identifies as objectum sexual (OS), said her first love was a drum set at 14 years old.

“She was also previously been in love with the Statue of Liberty — for which she legally changed her name in 2010 — and has traveled to New York six times to visit it, but said the distance took its toll on their relationship,” according to Inside Edition.

Lady Liberty never would meet her half way and the relationship was too one sided.

Objectum Sexual is identified (at least for now) as a disorder. I can’t believe I just clarified that for you. It falls on the autism spectrum and is an anti-social personality trait. The person with OS doesn’t want the public scrutiny of human relationships and therefore chooses to develop attractions for inanimate objects. There have been some that have married the Berlin Wall and the Eiffel Tower.

Neither the Wall or the Tower were available for comment.

Meanwhile the 21st century world will continue to normalize this type of behavior rather than seek solutions and help those suffering from such mental dysphorias. After all, they aren’t hurting anyone. Right?