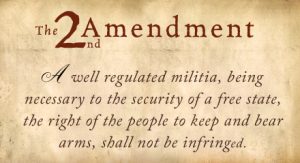 Per Conservative Firing Line on Tuesday, the Los Angeles Times noted that the Second Amendment is about the length of a tweet and decided to give readers an opportunity to rewrite what many see as the most important right guaranteed by the Constitution.

The Times wrote: It’s about the length of a tweet and has been interpreted to give us the right to bear arms. To own and carry a gun. To defend ourselves.

But it was written more than 200 years ago. Are the words still relevant in 2017? How would you change the language in your revision? What details would you add to your interpretation? Tell us below.

And many did respond.

We agree with that sentiment. Many, however, had other points of view.

“No private citizen is allowed to bear arms unless absolutely necessary for their own protection and that must be proven in a court of law,” said Josh Berman of Los Angeles.

“In a civilized society no one needs guns, especially those whose only purpose is to kill people,” added Gus Schwartz of Oakland, California.

“The people, being protected by the state forces should hence not bear arms of any kind,” another person wrote.

One of the Times’ “featured responses,” coming from John of Los Angeles, read: “A well-regulated Militia, composed of citizens fit for compulsory service, shall be issued suitable Arms for the common defence of a free State.”

“The right of the people to keep and bear Arms, just so they can go skeet shooting, shall not be infringed,” added Jeff Dunn of Laguna Hills, California.

“The days of relying on a well regulated Militia for State security were long ago… today there are too many Arms infringing upon too many lives,” wrote Bob of San Clemente, California.

Sastry of Herndon, Virginia said: “It is illegal for an individual to own arms of any form, shape, type as his security is responsibility of the government.”

“Amendment XVIII. The 2nd amendment shall not be construed to cover, advocate, or condone the purchase, possession or sale of any Arms,” suggested John of Pasadena, California.

Brian of Orange, California, offered this: “Rights are sometimes abused. Anytime any amendment is abused, including the Freedom of Speech and Assembly, it shall be hereby repealed.”

“A well regulated …. the right of people to keep and bear arms of one 7 bullets handgun per family after an extensive background checked,” said Omara Turner.

Sam of Los Angeles threw in a sexist twist in his response: “All males must relinquish their firearms. They have proven themselves untrustworthy. Women cannot let males use their firearms.”

Lynn of Los Angeles also gave a sexist response: “Since men are primarily reaponsible (sic) for all mass murders, only women will be allowed to keep and bear arms. Any man with a gun will be arrested.”

“You have the right to own a water pistol and to splash others as necessary, but not to drown out their voices,” wrote Beatty of Scranton, Pennsylvania.

Paul of Los Angeles suggested an amendment to repeal the entire Bill of Rights: “The first ten articles of amendment to the Constitution of the United States are hereby repealed.”

Steve of Seattle, Washington, also suggested an amendment to repeal gun rights: “The second article of amendment to the Constitution of the United States is hereby repealed.”