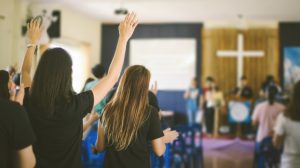 Since the Supreme Court has upheld the First Amendment right to worship freely and express your religion by stating that churches and other houses of worship have the right to actually hold services inside their own buildings, Los Angeles County has graciously decided to lift it’s ban on indoor worship gatherings.

Gee, how might nice of them to obey the First Amendment and allow churches to actually meet in their buildings like normal people. What would we ever do without people like California Gov. Gavin Newsom to help protect us from big, bad religion.

“The Los Angeles County Health Officer Order will be modified today to align with recent Supreme Court rulings for places of worship,” the California county stated in a press release that was put out on Saturday. “Places of worship are permitted to offer faith-based services both indoors and outdoors with mandatory physical distancing and face coverings over both the nose and mouth that must be worn at all times while on site. Places of worship must also assure that attendance does not exceed the number of people who can be accommodated while maintaining a physical distance of six feet between separate households.”

Last week, the Supreme Court handed down two rulings that proved to be a win for houses of worship. As The Daily Wire reported:

On Tuesday, the Supreme Court, drawing from the ruling they issued last month in favor of New York churches and synagogues against New York Governor Andrew Cuomo’s pandemic restrictions in the case Roman Catholic Diocese of Brooklyn v. Cuomo, issued an unsigned order that sided with a Colorado church in one case and a Catholic priest and rabbi in New Jersey in the other.

Gov. Newsom has been locked in a battle over religious liberty with megachurch Pastor John MacArthur. MacArthur has refused to abide by restrictions put in place that would prevent his people from being able to come to church every Sunday and worship the Lord.

While many threats were thrown around, MacArthur stood up against them and continued to choose following God instead of following man.

Hopefully, other counties across the country follow suit and opt to uphold the constitutional right for churches to meet indoors, especially as winter settles in.