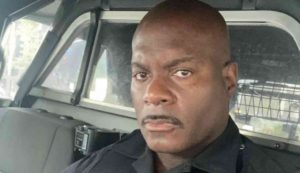 A black law enforcement officer who works for the Los Angeles Police Department has issued an invitation to basketball superstar LeBron James to come and have a little chat about policing after the NBA legend posted a tweet criticizing a police officer who saved the life of a teenage girl by shooting another girl who had a knife and was about to stab her.

Both girls were black.

Officer Deon Joseph has worked for the LAPD for 24 years and has worked in the roughest part of town, Skid Row. Joseph posted a lengthy letter on Facebook addressed to James, calling his stance on policing both “off base and extreme.”

James took a lot of heat after posting a tweet saying, “YOU’RE NEXT #ACCOUNTABILITY” along with an image of a Columbus, Ohio, police officer following the shooting of Ma’Khia Bryant. He later took the post down, saying it was being used by others to “create more hate.”

“Your tweet that targeted a police officer in Ohio who saved a young woman’s life was irresponsible and disturbing,” wrote Joseph. “It showed a complete lack of understanding of the challenge of our job in the heat of a moment. You basically put a target on the back of a human being who had to make a split second decision to save a life from a deadly attack.”

“…Instead of apologizing, you deflected,” Joseph continued. “You said you took your tweet down because you did not want it to be used for hate, when the tweet itself was the embodiment of hatred, rooted in a lack of understanding of the danger of the situation.”

Joseph said police officers and communities need to come together to “build bridges to save lives on all sides” and offered to have a discussion with James.

“The offer is on the table Lebron. No cameras. No fanfare,” said Joseph. “Just two men who care talking. I know it’s a long shot. But this division and hatred must stop.”

James should take up Joseph’s invitation and go have a chat with him. He just might learn something.