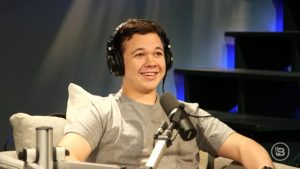 Kyle Rittenhouse, recently acquitted of murder in one of the most important self-defense cases in the history of this country, sat down for an interview with TheBlaze TV’s “You Are Here,” where he shared his thoughts about his recent trial.

To say the 18-year-old had some rather choice words for NBA legend LeBron James would be an understatement.

During Rittenhouse’s testimony concerning the night when he shot three people in self-defense during a Black Lives Matter riot, the young man broke down in tears.

James tweeted a response to the breakdown saying, ,”What tears????? I didn’t see one. Man knock it off! That boy ate some lemon heads before walking into court.”

What tears????? I didn’t see one. Man knock it off! That boy ate some lemon heads before walking into court. 🤣🤣🤣 https://t.co/LKwYssIUmD

Rittenhouse went on to tell the “You Are Here” hosts, “I was a Lakers fan, too, before he said that.”

“I was really pissed off when he said that because I liked LeBron,” Kyle continued, “and then I’m like, you know what, f*** you, LeBron.”

The Daily Wire reported that immediately after LeBron made his initial tweet, Rittenhouse spokesperson Dave Hancock said the teenager would be open to having a conversation with the Laker star:

“[Kyle] is an empathetic and caring young man.”

“And to LeBron, I would just say, he should be paying more attention to the Lakers,” slammed Hancock.

“But, if he would like to have a sit-down at some point in time, I’m sure him and Kyle can talk about how we can change and fix the system that allows prosecutors to do what they’re doing to Kyle right now,” he offered. “It’s abhorrent.”

Many conservatives took to social media to mock James for his tweet.

Ben Shapiro, editor emeritus of the Daily Wire said, “Lebron, great defender of the Chinese government’s tyranny, also happens to be an unparalleled dumpster fire in the field of criminal justice.”

Lebron, great defender of the Chinese government's tyranny, also happens to be an unparalleled dumpster fire in the field of criminal justice pic.twitter.com/Hs9JeXnBt9

“He’s crying because he had to shoot someone and take a life in self defense. You cried because you got a cramp,” commentator Stephen Miller zinged.

He's crying because he had to shoot someone and take a life in self defense.

LeBron James deserves all the ridicule he got and then some.