Kyle Kashuv, Grandson of Holocaust Survivor, Called “Hitler” in Class By a TEACHER for His Pro-Gun Views 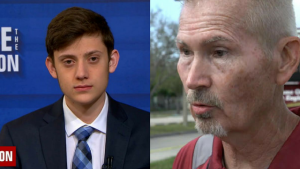 Kyle Kashuv has been an absolute rockstar following the tragic shooting at his high school in Parkland, Florida.

While other students have done little more than bask in the glory of a favorable media while rubbing elbows with celebrities and trashing millions of law-abiding gun owners, Kyle has been working hard on gathering pertinent facts and figures to the gun debate, taking on notorious anti-gun British media personality Piers Morgan, and meeting with politicians to push actual legislation to help reduce school shootings.

This has, of course, made him a target of angry left-wingers who hate to see one of the high school students they were hoping would help them push their narrative out there doing the opposite-standing up for the Second Amendment and looking at the root of the cause of school shootings rather than blaming the weapons themselves.

In the last week, Kyle has learned to shoot an AR-15, then been questioned by school security and Sheriff’s deputies for posting pictures of his trip to the shooting range on Twitter (yes, the same Sheriff’s deputies who totally failed to prevent or stop the shooting), and now he’s being bashed by a teacher (yes, an adult teacher) in class for his pro-Second Amendment views.

So… I just got a call from a friend of mine from @GregPittman1957's class and he apparently compared me to Hitler in class and said I am a piece of crap. The rant was about 10-minutes during class time and how he was right and I was wrong with my comments…

Several Twitter users were quick to comment how egregious it was not only for a teacher to bash a student in this manner, particularly a history teacher who should know better than comparing someone to Hitler for vocally supporting the Second Amendment.

But it’s worse than that.

American History Honors teacher Gregg Pittman has already attacked Kyle on social media in the past for his pro-gun stance. If you remember all the way back to last weekend when Kyle visited a gun range with his dad, Pittman called him out on social media for being “attention-seeking.”

Apparently, as Pittman was told by school administrators not to tweet at Kyle anymore, he decided to bash the high school sophomore in class instead.

Pitman most likely did not know this, but the comparison to Hitler was particularly insulting and low to Kyle, who is not only Jewish himself, but whose grandfather survived the Holocaust.

My grandfather was one of the only survivors of the holocaust out of his entire family, and now a teacher is calling me the next Hitler because I have different political views. Sad!

We are at a seriously low point in the gun debate when adult history teachers are comparing Jewish children to Hitler for defending the sacred liberty of all Americans. Sad indeed, Kyle, sad indeed!