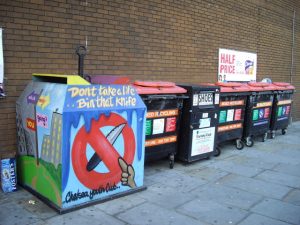 To the shock of absolutely no sensible people anywhere, knife surrender bins installed in the UK for knife-wielding criminals to surrender their dangerous weapons have been robbed by criminals who are now wielding quite a few more knives.

Criminals tend to not obey the law, you know. It’s funny how that works.

You’ve likely heard that the UK has actually been implementing “knife control,” since their highly restrictive gun laws did not, in fact, suppress the urge to commit violence among their citizens.

As evidenced by the fact that knife crime had apparently run so rampant, they implemented “knife control.”

And recruited Cookie Monster to do so, too, by the way.

What could have possibly gone wrong?

“Police are on the hunt for a group who broke into a bin full of knives that had just been surrendered,” Metro UK reports. “The suspects were caught on CCTV hauling the weapons collected by police as part of a knife amnesty. Officers installed the ‘knife surrender bin’ following a 52 per cent spike in knife crime across area over the past year.”

I’ll give you a moment to stop laughing.

Because now there’s a bunch of people foolish enough to surrender their knives over to the government to make the streets safer and a few lucky criminals with a whole lot of knives.