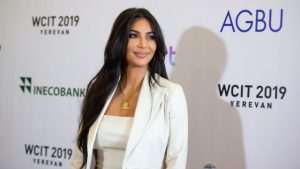 Reality TV star and former wife of legendary rap artist Kanye West, Kim Kardashian, recently weighed in on what she thought about the criticism she received for her part in working with former President Donald Trump on various aspects of criminal justice reform.

Kardashian’s remarks were made during her appearance on a recent episode of the “Honestly with Bari Weiss” podcast.

“I’m just about doing the right thing; I’m really not about politics at all,” she said. “It’s really about the people inside and if I can do anything — no matter if it’s Obama, Biden, Trump, I’m willing to work with anybody. It’s not really about being liked. If I could change someone’s life, that’s what it’s about for me,” Kardashian continued.

During the course of the interview, Weiss went on to ask her for her thoughts on cancel culture.

“I believe that if we cancel someone for something that they had done or said in their past, then we’re not inviting them into the conversation to really understand,” Kardashian responded. “It depends on the situation. You might not care if it’s absolutely ridiculous. But it’s a fine line. It’s what you were asking in the original question: When do you let something go? And when do you have thick skin and not care what people say about you?”

“The more that I don’t care about fame, the less I care to correct people. I don’t really care what people think about me, but there’s some times where I say, ‘OK, I completely understand how you would feel like this is disrespectful, and I will absolutely change this,'” she continued.

“I always own up to the mistakes that I make and I try not to make them again. That’s just how I live my life. But I think if you don’t have these conversations with people, how are they ever going to change something that isn’t right?” The reality star said.

Weiss asked about the uproar over Kardashian’s now estranged-husband Kanye West wearing a MAGA hat on “Saturday Night Live” in 2018.

“I learned a lot from that situation,” Kardashian responded. “No matter what, it taught me to be a little bit more empathetic for people that just want to do what they want to do: freedom of speech! And if you want to wear the hat, wear the hat.”

“I respect the fact that he knew exactly what he believed in and always stood by that. To me, that’s a good quality to have, no matter who is against you and no matter what the circumstances are. I think that it’s just admirable and it’s just a really cool quality. Even if it’s not what I agree with, or even if I would have done it differently, I think it’s commendable,” she added.

Meanwhile, Kardashian announced on Monday that she had passed her “baby bar” exam after three failed attempts in two years. Not attending a traditional, state-accredited law school means she had to pass the exam, which according to the State Bar of California is the equivalent to completing one year of law school.

Wait a second. Kim K passed a bar exam? Baby or not, that’s…well that’s just not what you expect to hear when it comes to a Kardashian.

We are living in strange times.