These Kids in Richmond Are Leading the Way 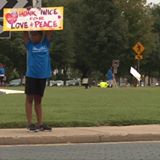 While most of the country is gearing up to revive the War Between the States, two people from Richmond, Virginia did something positive yesterday. Street Love RVA founder Yvonne Libron and Amiri Richardson-Keys, owner of The ARTS Community Center, organized a demonstration for nearly two dozen teenagers yesterday.

Instead of marching and chanting or rioting and pillaging neighborhoods, the teens stood along Monument Avenue in front of Richmond’s statue honoring General Robert E. Lee, flashing signs at passing cars. The signs had messages including, “Flash your
greatness”, “We are family”, and “Honk twice for love and peace”.  Local resident Terry Rae said he was encouraged by the young voices.

Both Libron and Richardson-Keys were out with the kids Thursday, Mr. Richardson-Keys said the kids got a lot of love. People honked and gave thumbs up as they rode by, while others stopped to encourage the group and drop off bottle of cold water. The rally’s location was set more than two weeks ago, before things got ugly in Charlottesville last weekend. Richardson-Keys said those events and their aftermath made the demonstration even more important.

So many over educated adults are tearing our nation apart. Maybe it’s time to be quiet and let the kids lead the way. It seems they’re not nearly as childish as the grown-ups have been lately.