Kevin McCarthy Goes Off On Pelosi, Democrats For Using Coronavirus To ‘Enforce Socialism’ 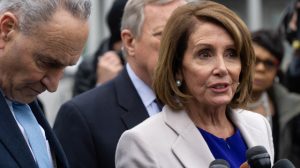 One of the few principles that the left actually lives out in their every day lives is that of not allowing a good crisis to go to waste. For those who might not understand what that means, it’s essentially when something bad happens, like a pandemic, the left seizes it as an opportunity to get things that are a part of their agenda passed into law.

Which is precisely what folks like House Speaker Nancy Pelosi and other House Democrats are trying desperately to do right now by holding stimulus spending bills hostage in exchange for passing bits and pieces of their wishlist.

“It’s really sickening that the Democrats are using this opportunity to enforce their socialism,” McCarthy said Monday on Fox News. “Remember, what is this bill that they just passed on Friday? Well, it’s about pot, it’s about prisoners, it’s about politicizing election law, prioritizing illegal immigrants and pensions.”

The largest chunk of money, about $1 trillion, would go to state and local governments to assist them during a loss of tax revenue as a result of the economic shutdown caused by the coronavirus. The bill also includes millions of dollars for “environmental justice grants” and funding for the humanities, among other initiatives.

“These are all things that are socialist wish lists that they’ve been trying to pass long before COVID ever came to this land, and that’s exactly what they’re trying to do, knowing that it will not go anywhere,” McCarthy stated.

The criticism from McCarthy carries a lot of merit. In fact, many congressional Republicans have pointed out certain comments made by those on the left that indicate using this crisis for their political gain is exactly what they are planning to do.

Like when Majority Whip James Clyburn stated back in March that the coronavirus is a “tremendous opportunity to restructure things to fit our vision.”

They aren’t even hiding their true intentions anymore. What’s scary is it doesn’t seem that many Americans really care at this point. They are far too worried about this virus, despite the fact that much of the information we have on it seems to say exactly the opposite of what the left wants us to hear.

McCarthy weighed in on these comments saying, “It goes beyond AOC. It is now throughout the entire Democrat socialist base of what they want to utilize this opportunity to, because when we wanted to help small businesses with their loans, Nancy Pelosi went to the freezer to stop it.”

He’s right on the money.

Let’s hope that Americans start waking up and stop allowing the left to strip our rights away in the name of security, which is something they cannot actually provide for us anyway.