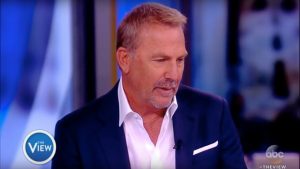 Actor Kevin Costner has joined the cacophony of liberal voices blasting out of Hollywood at extremely high — and shrill — volumes by slamming Trump for creating what he called a “harmful political environment” in our country.

Hate to tell Mr. Costner this, but it was race baiting Democrats who destroyed the unity in this country, and most of them were at their hay day during the Obama administration, so while you have a finger pointing back at us three more are pointing right back you, sir.

Costner, who grew up in a Republican household and has shifted toward the Democratic Party, appeared on ABC’s “The View” to discuss his new television series “Yellowstone” on the Paramount network.

During the interview, co-host Joy Behar asked Costner for his thoughts on the state of the country and the Trump administration’s practice of separating immigrant children from their parents when families are apprehended for crossing the border illegally.

Costner proceeded to attack the Trump administration for what he described as a toxic environment.

“I’m not recognizing America right now,” Costner said. “I don’t recognize its voice. I don’t recognize any individual statements. I feel people going with the flow, and there’s people right in the middle. We’re in a really weird spot, and it takes a high level of compassion, empathy, and intelligence to work our way out of this.”

Costner, who won two Academy Awards for his work on the film Dances With Wolves, went on to criticize the Trump administration for separating families at the border without a plan, asking whether anyone can imagine the terror of the children not being able to speak English.

“We have to do better. We’ve been about more. We can be about more, and right now we are acting really small,” Costner said.

Now, in all honesty and fairness, it’s totally acceptable for Costner to express his views, openly and honestly. That’s how we as conservatives want to be treated otherwise so let’s be sure to extend folks on the left the same courtesy, even if the favor is not returned.

However, that doesn’t mean ideas, thoughts, and beliefs will be free from the eyes of those with the power of discernment who will mock falsehood relentlessly.

Costner is just parroting what others have said about the state of the country, particularly those who work in the entertainment industry. Maybe one day he’ll get it and shift back to the right.