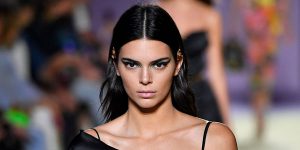 So I’m not super hip to the gossip in the fashion world, but apparently, Kendall Jenner gets in trouble a lot for offending the wrong people.

I’m honestly confused, because I thought her family were big heroes to these people, I mean, isn’t her dad a lady now or something?

Anywho, the politically correct mob is wielding their pitchforks and torches yet again, because she was photographed with a perm that was a little too culturally appropriatey.

To me it just looks like she stuck her finger in an outlet while wearing designer clothing, but to the keyboard warriors of Instagram, it apparently looks like oppression.

The Daily Wire reports on the backlash:

“FOR YEARS WE have been penalized about our looks and especially our hair, It is a slap in the face when non-Blacks try to imitate our look,” one Instagram user wrote.

“I like Kendall but why didn’t they use an ethnic model who has hair like that,” another wrote.

Other Instagram users were confounded about all the fuss over the photo.

One user emphatically protested: “Backlash for this photo?? Seriously?? That is the stupidest thing I’ve ever heard!! So now someone has decided who can have a full curly look/ afro?? That is just BS!! Pick your battles people and get over it…seriously!!”

“I’m so sick and tired of people criticizing Kendall Jenner,” another said. “She could wear her hair straight and have a green bow and it would be offensive. I’m honestly ashamed to say this, but y’all need to step back and look in the mirror, who are you to come at her when your just a HUMAN LIKE HER. Y’all should be ashamed, LEAVE HER BE. (Also that’s not an Afro).”

Naturally (no pun intended), Vogue was forced to apologize.

“The image is meant to be an update of the romantic Edwardian/Gibson Girl hair which suits the period feel of the Brock Collection, and also the big hair of the ’60s and the early ’70s, that puffed-out, teased-out look of those eras,” they said in a statement to E!News. “We apologize if it came across differently than intended, and we certainly did not mean to offend anyone by it.”

Just a quick update that there are indeed still people starving, living in brutally oppressive regimes, being persecuted for their faith, thrown of buildings for their sexuality, and dying of disease across the world, in case anyone is looking for anything of significantly more substance to get upset about.