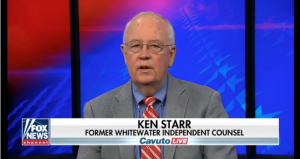 In his enlightening interview, Starr stated that the ravenous effort to impeach Trump is “doomed to fail”:

…impeachment is doomed to fail given what we know. Now, obviously the facts are flowing in. In the history of the country, obviously presidential efforts to impeach do not work. That we know, but guess what? Of the 62 impeachment proceedings … eight have resulted in convictions…

Starr also called out the agenda-driven anti Trump crowd and its clamoring for impeachment rather than oversight:

This is not going to result in a conviction, and so why are we on the impeachment train? We should be on the oversight train, and quit calling it impeachment – especially since there really is something quite profoundly wrong under our Constitution to call it impeachment – that we’re on a formal impeachment inquiry. No, with all due respect. Until the House of Representatives votes as a body to conduct an impeachment inquiry or investigation, there is simply action by committees that’s been sanctioned by the speaker. It sounds like a structural point, but guess what? We live by structure in our constitutional republic.

First of all, there would be a formal action by the House resulting in, if there’s any court fight, then a federal judge, or a court of appeals, or the Supreme Court knows this is the action of the peoples’ house, not of the speaker saying, “I hereby smile on what these different oversight committees are doing.” You would also have the practical effect of centralizing the inquiry, as opposed to this balkanized approach that seems to be getting underway, in the House Judiciary Committee as we saw in the Clinton inquiry years ago.

Cavuto continued, pointing out Democrat claims that when the Nixon impeachment process was scoffed at when it first began but, as it went on, damning new information came to light, “the tide turned, and that’s what Democrats seem to be counting on this time around.”

Well, that’s right, but the tide turned when it became clear that there were White House tapes, as you said – by the way, that was not revealed by the House Judiciary Committee, but by an oversight committee … we now know the basic facts, or at least we think we know the basic facts because the president, wisely or no, released the transcript. That’s what this is all about – the interpretation of that conversation that the president had with the president of Ukraine.

However, when Cavuto asked Starr if there is “anything in that transcript … that troubles [him],” even if it’s not an impeachable offense, Starr answered:

Starr continued, stating that “even if it is [a crime], guess what? The Clinton investigation and impeachment tells me you can be guilty of perjury – there’s no suggestion of perjury; you can be guilty of obstruction of justice – there’s no obstruction of justice; and we’re still not going to remove this individual from office. Once again, the president has taken action that reflects his instincts, and sometimes his instincts get him into trouble and that’s very unfortunate. So yes, I was troubled by that.”