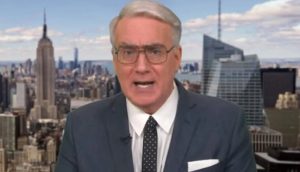 Radical left-wing pundit Keith Olbermann stunned the folks on Twitter Wednesday when he seemed to try and make a connection between the horrific Michigan high school shooting and the suspect, Ethan Crumbley’s mother’s previous support for former President Donald Trump.

Olbermann, in a response to an article put together by Barstool Sports which memorialized one of the kids killed during the incident, thought it was the right time to fire off a couple of shots at the outlet for promoting what he stupidly referred to as “Trumpist Fascisim,” which, he said, earned the support of the shooter’s mom.

This kid died to stop a school shooter whose mother echoed the Trumpist Fascism of @stoolpresidente and @barstoolsports https://t.co/XQ6JF8dsS9

“This kid died to stop a school shooter whose mother echoed the Trumpist Fascism of @stoolpresidente and @barstoolsports,” Olbermann said in his post on Twitter.

Olbermann referred to an excerpt from a Daily Beast story that details the political history of the suspects mother, who penned an open letter of support to then-President-elect Trump which she posted on her blog in Nov. 2016.

Dude wtf is wrong with you? https://t.co/x86nscPoX8

The shooting occurring in the Oxford community in Michigan, leaving four students dead and seven others, including one teacher, injured. Police say the 15-year-old used his father’s gun in the attack, which was purchased only a few days prior to the attack.

Ethan Crumbley, the alleged shooter in the incident, pleaded not guilty Wednesday to one count of terrorism causing death, four counts of first-degree murder, seven counts of assault with intent to murder, and 12 counts of possession of a firearm in the commission of a felony.

Not quite sure why the kid is pleading not guilty. This is probably going to be a mess, folks. Prepare yourselves.