Kavanaugh Turns Down Over Half a Million Dollars Raised on GoFundMe 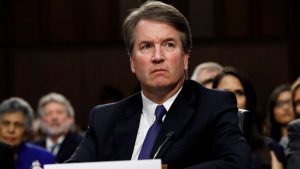 Yesterday, we reported that Christine Blasey Ford, the woman who accused Brett Kavanaugh of sexual assault in the early 1980’s just days before he was set to be confirmed to the Supreme Court, has amassed a huge chunk of cash via the crowdfunding website GoFundMe, and is also entertaining the idea of a book deal.

Meanwhile, a relatively smaller but nonetheless significant amount of money–$600,000 to be exact–raised for Kavanaugh by his supporters has been turned down by the recipient, who cites ethics concerns over accepting the money.

Kavanaugh cited judicial ethics concerns as he turned the generous offer down, stating that he appreciated the sentiment but ethics rules precluded him accepting the funds. Travis Lenkner, a former clerk of Kavanaugh’s, sent the statement from Kavanaugh ten days ago, but John Hawkins, the well-known conservative who organized the GoFundMe campaign, said he didn’t publish the letter immediately because he needed time to arrange an alternative destination for the funds.

Justice Kavanaugh did not authorize the use of his name to raise funds in connection with the GoFundMe campaign. He was not able to do so for judicial ethics reasons. Judicial ethics rules caution judges against permitting the use of the prestige of judicial office for fund-raising purposes. Justice Kavanaugh will not accept any proceeds from the campaign, nor will he direct that any proceeds from the campaign be provided to any third party. Although he appreciates the sentiment, Justice Kavanaugh requests that you discontinue the use of his name for any fund-raising purpose.

The $611,645 raised on Kavanaugh’s behalf came from approximately 13,000 different donors, many of whom remained anonymous.

Hawkins closed the GoFundMe on October 6th, shortly after Kavanaugh was confirmed, explaining:

The last thing any of us want is for our attempt to help Judge Kavanaugh’s family to be used against him. Given the strictness of the ethics rules and the possibility that the Judge could get in trouble if he’s tied to this in any way, I made it clear that we wouldn’t want a public “Thank you” that could potentially be used against him.

The funds, Hawkins decided, would be most appropriately directed towards causes he believes the Kavanaugh family would appreciate: The Catholic Youth Organization (CYO), the Tuition Assistance Fund, and the Victory Youth Center.

Blasey Ford didn’t seem so concerned about the ethical concerns of cashing in on her testimony…just saying.