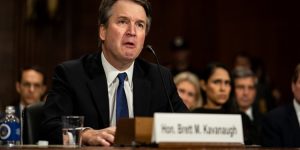 Regardless of whether or not you think Brett Kavanaugh is guilty of the baseless and unsubstantiated claims made against him in what were supposed to be the final days of his confirmation hearings, it’s hard not to feel like he will forever have a bone to pick with Democrats.

And if he did, really, who could blame him? They’ve spent the last three weeks brutally, shamelessly, and ruthlessly smearing his character by successfully convincing millions of Americans he’s a drunk and a rapist when nearly all evidence indicates otherwise.

Still, his stellar judicial career and personal accolades remain, and he released a surprise op-ed this week in the Wall Street Journal to, one last time, defend himself against all accusations and speculation.

His bottom line? He still has every intention of judging fairly if appointed to the Court.

In his piece, I Am an Independent, Impartial Judge, he explained that, during his testimony last week, he was more emotional than he’s ever been in his life, but that he was there as a husband, father, and a man, not as a judge.

My time in high school and college, more than 30 years ago, has been ridiculously distorted. My wife and daughters have faced vile and violent threats.

Against that backdrop, I testified before the Judiciary Committee last Thursday to defend my family, my good name and my lifetime of public service. My hearing testimony was forceful and passionate. That is because I forcefully and passionately denied the allegation against me. At times, my testimony—both in my opening statement and in response to questions—reflected my overwhelming frustration at being wrongly accused, without corroboration, of horrible conduct completely contrary to my record and character. My statement and answers also reflected my deep distress at the unfairness of how this allegation has been handled.

I was very emotional last Thursday, more so than I have ever been. I might have been too emotional at times. I know that my tone was sharp, and I said a few things I should not have said. I hope everyone can understand that I was there as a son, husband and dad. I testified with five people foremost in my mind: my mom, my dad, my wife, and most of all my daughters.

But he pointed to his extensive history as a judge to argue that he is still very much capable of judging fairly, not politically:

Going forward, you can count on me to be the same kind of judge and person I have been for my entire 28-year legal career: hardworking, even-keeled, open-minded, independent and dedicated to the Constitution and the public good. As a judge, I have always treated colleagues and litigants with the utmost respect. I have been known for my courtesy on and off the bench. I have not changed. I will continue to be the same kind of judge I have been for the last 12 years. And I will continue to contribute to our country as a coach, volunteer, and teacher. Every day I will try to be the best husband, dad, and friend I can be. I will remain optimistic, on the sunrise side of the mountain. I will continue to see the day that is coming, not the day that is gone.

I revere the Constitution. I believe that an independent and impartial judiciary is essential to our constitutional republic. If confirmed by the Senate to serve on the Supreme Court, I will keep an open mind in every case and always strive to preserve the Constitution of the United States and the American rule of law.

The Democrats have done everything they can to cast doubt on Kavanaugh’s ability to judge fairly, but there’s no ignoring the fact that they put his family through hell and then tried to claim his reaction is why he’s incapable of serving on the court.

As long as we wait for Jesus to come back, our judges are going to be human, fallible men, and Kavanaugh may have an impressive history of upholding the American Constitution, but he is also a man, a man who stepped up to defend his family under enormous personal pressure that few people could withstand without reacting in the same way.

I don’t know about you, but I believe he’s done the best he could considering the circumstances.