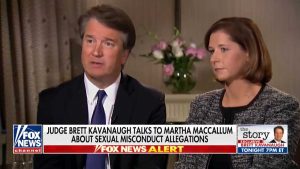 There is always the possibility that Kavanaugh really is a serial sexual assailant, but if he’s not, you’ve got to feel incredibly sorry for the guy.

He’s been accused of some pretty awful, disgustingly graphic things at this point, and now he’s been forced to sit before the nation and describe his high school sex life.

That’s right–in the court of public opinion, carefully vetting a judge to sit in the most dignified, respected court in the country, possibly the world, now includes scrutiny of how much hanky-panky there was at prep school.

And in Brett Kavanaugh’s case, that was very little.

None, in fact, as he was forced to explain to Fox News’ Martha MacCallum in an interview that aired Monday night.

“We’re talking about allegations of sexual misconduct. I’ve never sexually assaulted anyone. I did not have sexual intercourse or anything close to sexual intercourse in high school or for many years thereafter. And the girls from the schools I went to and I were friends,” says Kavanaugh, sitting alongside his wife.

“So you’re saying through all these years that you were in question you were a virgin?” asks MacCallum.

“Never had sexual intercourse with anyone in high school?” the Fox News host follows up.

“And through what years in college, since we’re probing through your personal life here?” she asks.

Now, don’t get me wrong–I think it’s awesome that Kavanaugh had his head in his books and his eyes on the prize in school, and clearly, if you look at his professional life and happy marriage, this has worked very well for him.

I wish more high schoolers were like Kavanaugh’s description of himself in high school.

What is ridiculous is that we’re even discussing the adolescent sex life of a SCOTUS judge. If these allegations are found by the Senate Judiciary Committee to be as baseless as they appear to be, this will be proven to be as ridiculous and embarrassing a moment as it appears it is.

Trump era politics are so incredibly ludicrous–and it’s not even Trump’s fault. TDS is at epidemic proportions, people. We need to get a grip.