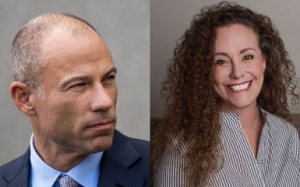 Well, this is some surprisingly fitting justice.

There was a valid concern that, following the mass media circus that was the Kavanaugh confirmation hearing, that once the whole thing was over his accusers would just fade away and we’d all forget that the Democrats likely orchestrated an elaborate character assassination for the purpose of either stopping the confirmation and/or racking up points for the midterms.

Fortunately, while all of his accusers have gone conspicuously silent now that he’s been confirmed, it appears that Congressional Republicans are not about to let them get off easy for what could potentially be criminal false statements and obstruction.

Remember Julie Swetnick, the woman who accused Kavanaugh of being in the vicinity at “gang rape” parties she attended and couldn’t even keep her story straight long enough for her segment on NBC?

The Senate Judiciary Committee has just recommended them both for criminal investigation.

To which I can only say…heck yes!

“While the Committee was in the middle of its extensive investigation of the late-breaking sexual-assault allegations made by Dr. Christine Blasey Ford against Supreme Court nominee Judge Brett Kavanaugh, Avenatti publicized his client’s allegations of drug- and alcohol-fueled gang rapes in the 1980s,” a statement from the Committee reads. “The obvious, subsequent contradictions along with the suspicious timing of the allegations necessitate a criminal investigation by the Justice Department.”

“When a well-meaning citizen comes forward with information relevant to the committee’s work, I take it seriously,” said Committee chairman Sen. Chuck Grassley, who recommended the duo for investigation.

“It takes courage to come forward, especially with allegations of sexual misconduct or personal trauma. I’m grateful for those who find that courage.”

“But in the heat of partisan moments, some do try to knowingly mislead the committee. That’s unfair to my colleagues, the nominees and others providing information who are seeking the truth,” he continued.

“It stifles our ability to work on legitimate lines of inquiry. It also wastes time and resources for destructive reasons. Thankfully, the law prohibits such false statements to Congress and obstruction of congressional committee investigations. For the law to work, we can’t just brush aside potential violations. I don’t take lightly making a referral of this nature, but ignoring this behavior will just invite more of it in the future.”

Well, this certainly is pleasantly surprising, since we’ve grown accustomed to a serious lack of actual justice in Washington.

Even if they don’t find anything substantial enough to convict these two kooks, it’s good to know accusations as unbelievable as Swetnick’s are subject to scrutiny.