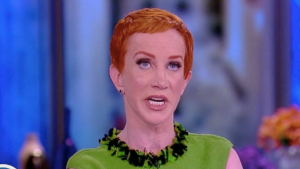 Kathy Griffin, who lost important jobs and sponsorships and was shunned even by the leftist Hollywood elite for her tasteless photo of a severed Trump head last year, was apparently emboldened by Michelle Wolf’s unfunny and gross humor at the White House Correspondents’ Dinner over the weekend and has come back into the public eye, guns blazing. (Figuratively, of course, she probably hates guns as much as any Hollywood celebrity).

Appearing on The View, the friendliest place on television for grumpy anti-Trump celebrities with a bone to pick, Griffin walked back her apology for the gruesome photoshoot from last year, which was particularly notable as Trump’s youngest son, Barron, who was 10 at the time, had to see the gory images on television.

“Look, I’m not holding back on this family,” Griffin continued. “This president is different, and I have been through the mill. And so now I’m back on the road.”

By having “been through the mill”, she means she was rightly criticized for her bombed publicity stunt from last year. She’s accused the president of “ruining her life”, although there is yet to be any evidence Trump actually made her hold up a mannequin likeness of his bloody head, ISIS-style.

At the time, she apologized profusely, admitting that she’d gone entirely too far, but it wasn’t too long before she began whining about the backlash.

One year later, watching another talentless comedienne bomb on stage at the WHCD only to be hailed as a hero by the Trump-hating mainstream media, she must have felt quite angry that she wasn’t the one being hailed as a hero for terrible humor.